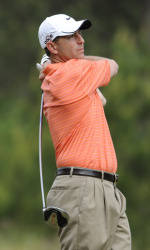 GREENSBORO, GA – The Chick-fil-A Bowl today announced the official pairings for its Chick-fil-A Bowl Challenge charity golf tournament May 3. Twelve university teams of head coaches and celebrity alumni will compete in six groups vying for their share of the $415,000 scholarship purse.

The groups will tee off at 8:30 a.m., Tuesday, May 3 and play a two-man scramble format over 18 holes. The tournament’s championship team will earn a $120,000 first place scholarship donation to their university.

Featured groups include rivalry pairings that mirror the Chick-fil-A Bowl’s ACC vs. SEC format. Two of the pairings will match teams that have competed or are set to compete in the Chick-fil-A Kickoff Game (Alabama vs. Virginia Tech – 2008 and NC State vs. Tennessee – 2012). Official group pairings include:

The nation’s premier head coach and celebrity golf event will be held at the beautiful Reynolds Plantation resort on Lake Oconee outside Atlanta. Over the past four years, the Chick-fil-A Bowl Challenge has provided $1.9 million in scholarship and charity to its participating universities.

For more information on the event, visit www.Chick-fil-ABowlChallenge.com.