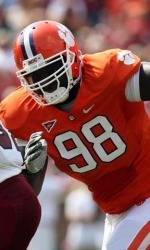 Notes on Clemson and the 2012 NFL Draft

 Clemson had four players drafted in the 2012 NFL selection process. Andre Branch was taken in the second round by Jacksonville, the 38th pick of the draft. He was the first Clemson player taken by the Jaguars in their history (started in 1995). Dwayne Allen was the first pick of the third round, the 64th selection of the draft, by the Indianapolis Colts. He and Stanford tight end Coby Fleener will both be rookies in camp with number-one pick Andrew Luck of Stanford.  Jamie Harper. The native of Kingsport, TN is the first Clemson player drafted by a team in his home state since Chris Clemons was drafted by the Miami Dolphins in 2010.  With four players drafted this year it marked the fourth consecutive year Clemson has had at least four players selected in the NFL draft. This is the first time that has happened since the 1982-85 era and just the second time in history. Clemson has had 19 players drafted over the last four years, the most in a four-year period since the 1990-93 era when 20 were selected. The Clemson record for a four-year period is 31 (1982-85).  Only Alabama had more picks than Clemson among the first 115 players taken in the 2012 NFL draft. The Crimson Tide had five, followed by Clemson, Stanford, LSU, Illinois, Oklahoma and Miami (FL) with four apiece.  Since Dabo Swinney became Clemson’s head coach the Tigers have had 19 players drafted, as stated above the most in a four-year period since the 1990-93 era when there were 20. Clemson and Miami have the most players drafted over the last four year with 19 apiece. North Carolina is third with 18 and Virginia Tech is fourth with 12.  Clemson is the only ACC school to have at least four players drafted each of the last four years. Clemson had four drafted in the 2009 draft, five in 2010, six in 2011 and four this year.  Clemson had three top 100 picks this year, the second straight year Clemson has had three top 100 picks, but just the second time since 1993. Being a top 100 selection is a good sign for these three Tigers, as 53 of the last 56 Clemson players taken within the first 100 picks of the draft have gone on to play in the NFL. One of the players who has not, is Jarvis Jenkins a rookie last year with Washington who was injured in the preseason and has not had an opportunity to play yet.

Players Can Improve When They Get to College  Two of Clemson’s four NFL draft picks were considered two-star players coming out of high school by various recruiting services. Andre Branch, taken 38th in the draft, and Coty Sensabaugh, taken 115th, were both two-star players, while Brandon Thompson and Dwayne Allen were four-star players.  Branch’s number-38 selection is the best by a former two-star player from Clemson. Branch and Sensabaugh are the third and fourth two-star players out of high school to get drafted from Clemson since 2002 signee classes. The others are Barry Richardson and Kavell Conner. Richardson has been a starter in Kansas City and Conner led Indianapolis in tackles last year.  Of the last 27 Clemson players to get drafted three were five-stars, 12 were four-stars, eight were three-stars and four were two-stars.  Clemson had nine players ranked among the top 100 in the nation according to ESPN.com in 2008. Seven of the nine have completed their careers and Branch (a member of the 2007 recruiting class) has been taken higher in the draft than all seven who have finished so far.  Branch was the 38th pick of the 2012 draft, higher than former teammates Jamie Harper (130th). Others ranked in the top 100 of that 2008 recruiting class were Kyle Parker and Spencer Adams who have gone on to other sports. (Parker was a first round pick in baseball, Adams an All-American on Clemson’s current track team). Teammate Antoine McClain has signed a free agent contract. Andre Ellington and Xavier Brewer are still in school.  Clemson was one of four programs to produce two two-star players who were drafted within the first 115 players this year. Boise State (with two first-rounders), Utah State and Louisiana Lafayette were the other schools with two two-star players who were drafted within the first 115 selections of this year’s draft.  Rivals.com provided a list of star rankings for the 2012 NFL draftees. Four of the draftees within the first 115 picks had no stars, 25 had just two stars, 36 had three stars, 41 had four stars and nine were five stars. Only 12 of the top 50 players in the draft were ranked as top 100 players out of high school by Rivals.com.