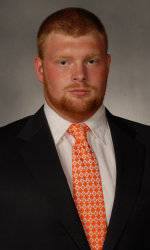 CLEMSON, SC – Two-year letterman offensive lineman Wilson Norris suffered a torn ACL injury during practice on Wednesday and it will require surgery. His status for the 2010 season is questionable. The surgery will take place some time later this month.

Norris played in 14 games last year for 94 snaps and had seven knockdown blocks as a second-team offensive guard. He was working as a second-team guard this spring as well. He played 61 snaps in seven games as a red-shirt freshman in 2008.

Norris is a native of Pickens, SC and Pickens High School where he was a Shrine Bowl selection.