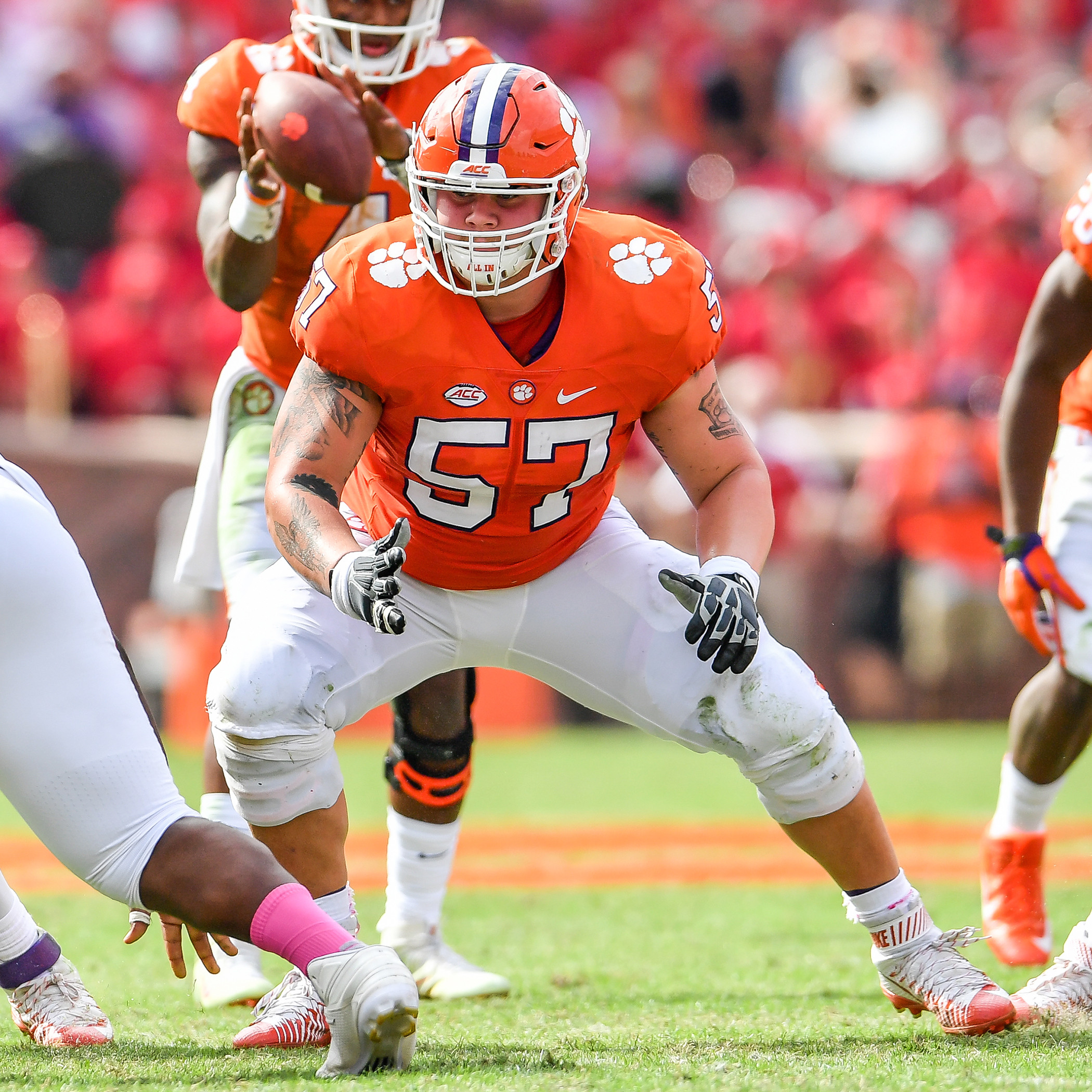 There is no doubting that center Jay Guillermo is strong. But he has an even stronger family who has been the backbone of his life. One family member in particular shaped him in innumerable ways.

“My grandfather is always there for me,” said #57. “His influence as a person and as a man has really rubbed off on me. It’s funny to hear my mom talk and say she sees so much of my grandpa in me.”

Guillermo’s grandfather was the head coach at Burns High School in Lawndale, N.C., for much of the offensive lineman’s life, giving him an interest in football from a young age.

“When I was little, I always hung around him. I got to be on the sidelines with him during games. I would sit there with him on Saturdays watching film from Friday night’s game. I would draw up plays to try and get him to run them the next week.”

After spending time breaking down film with his grandfather, Guillermo decided to suit up for little league football.

“My first year was in the second grade, and I remember the first day we put on pads…all of the coaches wanted to do the Oklahoma drill (full-pads blocking drill in a confined area).

“I was the biggest kid, but I remember being so nervous not wanting to mess up the Oklahoma drill. I just wanted to make my family proud.”

And proud he made them when he decided to commit to the first college that offered him, Clemson. But Guillermo’s love affair with the Tigers started much earlier than the day the first recruiting letter arrived in the mail.

“I had been a Clemson fan my entire life…it was always my dream school. My grandfather had always liked Clemson, because when he was in college, he was recruited by Frank Howard.

“Any time Clemson was on TV, I was the one to make everyone stop what they were doing and watch the game.”

Once he arrived on campus, Guillermo made sure to seize every opportunity he was given, especially when it came to running down the Hill.

“I had always dreamed of being on the Clemson football team. I wanted to take everything in and run down the Hill every opportunity I had, but I was so nervous the first time I did. I was afraid I was going to fall.”

There to pick him up if he did was All-American Dalton Freeman.

“Learning under Dalton, how he did things and his leadership were really special to me and something I still reflect on. I try and take things from his style because he was so respected in the football community for what he was able to do on and off the field.”

Guillermo uses what he learned from Freeman when he works with the Tiger offensive line.

“I came into a big leadership role this season being the only senior on the offensive line. I am trying to lead them how Dalton led me when I was younger, make the most of our time and not wish the days away.”

However, there was a time in his career when Guillermo was not seeing things as clearly as he does today. In February 2015, he left school to deal with a mental illness that had been creeping its way into his life…depression.

“It was one of the darkest times of my life,” he admitted. “I called up my mom and said I wasn’t sure if I wanted to play football anymore.

“That took her by surprise and that’s when the whole process of talking to coach (Dabo) Swinney and team psychologists started. From there, I began the path to recovery.”

After working hard for months to get control of his depression, Guillermo came back to school, and football, for summer camp in 2015. He began splitting snaps with Ryan Norton until Norton suffered a serious injury.

“I had become very disciplined in my regimen and the ball just started rolling. I got the opportunity to start against Louisville, and I took off from there.”

Week after week, Guillermo dedicated countless hours to keep his level of play the best it could possibly be. He applied the strength and determination he had from fighting his mental illness to the gridiron.

“My success is a testament to all the hard work I did while I was gone. It made me feel that my struggle was all worth it.

“I think about all the conversations with my grandfather. He said it would be the hardest thing I had ever done, but it would be the thing I would be proudest of having done. If I put my mind to it, I can do anything.”

Football aside, Guillermo is most proud of one accomplishment…graduating with a degree from Clemson next month.

“I feel so accomplished and happy. I am not the type of person who loves school, but to be able to say I got a degree from Clemson, a top-25 public university, is incredible. It makes me proud to see how far I have come.”

But before he crosses the stage to receive his diploma, Guillermo is planning to live the rest of his time as a student to the fullest.

“Of course, there are days when you don’t want to go to practice, but then you think about how you don’t have too many practices left. It’s a grind, but I still like to get out there and have a good time. I don’t plan on wishing the days away.”

His passion for that same grind is something that Guillermo hopes to leave behind for his teammates.

“I want to be known as a hard worker…a person who wasn’t afraid of work and gave everything he had every day.

“I also want to be known as a servant leader. That’s who I try to be for all of my teammates. I would give the clothes off my back for any of them.”

When the senior runs down the Hill alone against Pittsburgh on Senior Day, he knows that he will be filled with a plethora of emotions.

“I am probably going to be nervous about falling again,” said Guillermo laughing.

“My parents will be there and I am sure my mom will be down there crying. Now that it is my turn, it feels unreal. At the end of the day, it will be bittersweet, because I know that there is another chapter of my life coming. But at the same time, I don’t really want this one to end.”

When his final day in Tigertown does come and Death Valley is in his rearview mirror, Guillermo had a simple answer for what he is going to miss the most about this place.

“Everything. Luckily, when you come to Clemson, you are a part of the family and you are welcome back any time.

“The door is always open, and that is comforting to me.”