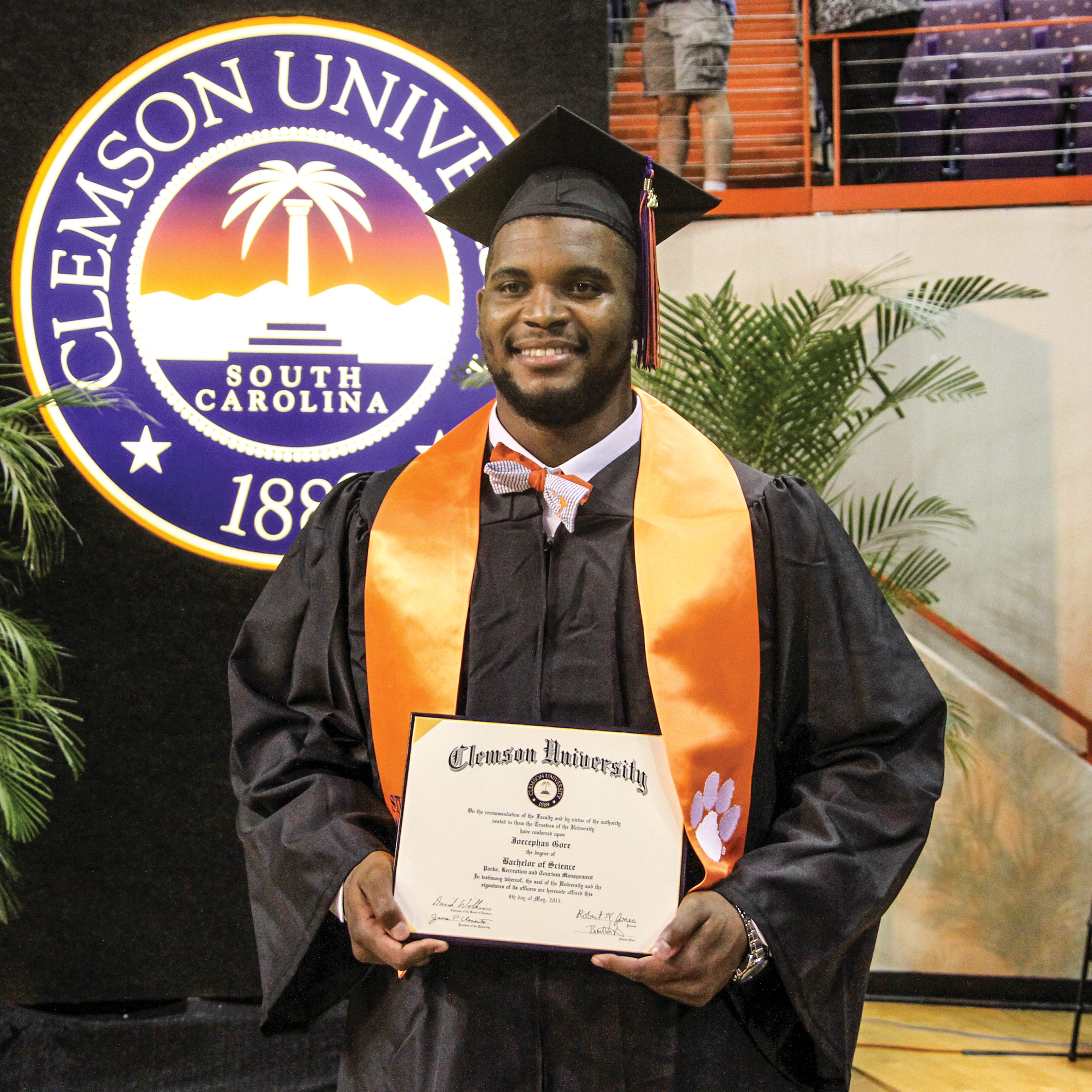 It’s Joe Gore’s time. His journey at Clemson has been unconventional due to injuries, but finally healthy, Gore is ready to stake his claim during his final season in a Tiger uniform.

Gore, a native of Lake Waccamaw, N.C., was heavily recruited in his home state. After originally committing to nearby NC State, he decided to reopen the recruiting process and give Clemson a look.

“Driving in, I looked at the campus and saw how beautiful it is. We drove around to see everything and went to a basketball game. I even got to run down the Hill. It was an awesome experience.

“The current players were all nice and welcomed me with open arms. No one was put off by me being there. They all introduced themselves and spoke to me without the coaches having to ask them, and that meant a lot to me.”

For Gore, that visit was all he needed.

“On the way back home, I took a nap in the car and pictured myself at the top of the Hill,” continued Gore. “I woke up and told my high school coach, who went on the visit with me, that I knew I wanted to come to Clemson.

“I immediately called coach Swinney and told him I was ‘all in.’ Coach Swinney said, ‘I knew it was going to happen as soon as you came to visit. I saw it in your eyes.’”

Gore came to Clemson ready to work, not knowing many obstacles would stand in his way. A January enrollee, the then defensive end began to work learning his playbook and transitioning to the college game. But shortly after the Spring Game, he suffered a setback.

“I tore my meniscus and MCL in my left knee,” recalled #73. “I was down about that but worked hard and actually came back earlier than expected.

“I found out more about what the Clemson family means after my first injury, my first serious one. I thought everything would go downhill from there. But everyone surrounded me and built me back up, so that was a cool experience.”

Gore was then asked to move from his familiar spot on the end of the defensive line to the offensive side of the ball.

“I moved to the offensive line during fall camp of the same year,” said Gore. “In the midst of that transition, I tore the same meniscus again and found myself in the same situation.”

During workouts the next summer, the rising sophomore was stretching and recognized something felt off.

“I sat down and couldn’t get back up. I didn’t know what happened.”

For the third time in just over a year, Gore tore the same meniscus.

Not only was he still adjusting to a new position, he was also having to overcome setback after setback. He continued to rehab and work hard, and his playing time began to increase.

Heading into his junior season in 2014, Gore was healthy and hungry for playing time. Then, as was becoming all too normal for Gore, he suffered another setback. This time, Gore had appendicitis and needed to have it removed immediately.

When asked what game has been most memorable in his career, Gore reflected on his first game back after that surgery.

“Of all of the games during my time at Clemson, the Syracuse game last season definitely stands out to me. It was the first game back for me after my surgery. They threw me out there with all younger guys.

“Coach (Robbie) Caldwell looked at me and said, ‘I’m counting on you to lead right now.’ I took that to heart and for the next eight minutes, all we did was run the ball.

With the title of senior comes responsibility to lead. For Gore, the quiet guy of the group, that has been an adjustment, but one he has enjoyed.

“It’s a little different,” stated the PRTM graduate. “I try to lead more with actions, but we have so many young guys at my position that it forces me to be more vocal. I’ve become a lot more vocal than I’ve ever been before and I’ve had to step into that role and run with it.”

Surrounded by younger players, Gore knows the importance of that leadership role. He has been that freshman before.

“When I was in their shoes, I had older guys helping me. Reid (Webster) was one of those guys I looked up to. He was so versatile and played every position throughout last season. He had a lot of knowledge and would help anyone out.

“Dalton (Freeman) was more of an off-the-field leader for me. When I first made the transition to offense, he was there, offering to help me with my playbook. Brandon Thomas and Gifford Timothy were the same, always trying to make me better.

“With all of the younger guys, it’s a little more pressure for me to lead at the tackle spot, but I embrace the pressure. I’m ready for them to jump on my back and let me lead. It’s been an adjustment, but I’m handling it really well.”

Caldwell, his offensive line coach, also knows how important Gore’s leadership is to his unit this season.

“I’m trying to get him to be more boisterous,” Caldwell said laughing. “It’s not his nature, but he is growing in that area. He leads by actions. He’s a great teammate. He helps teach the younger players and he is always very calm. I look for big things out of him this year. I love being around him.”

Caldwell has enjoyed seeing Gore grow and embrace the transition to the offensive line.

“Anytime a guy comes over from defense, he’s a little hesitant,” said Caldwell. “We knew we could use his ability better on offense, and it would prepare him for future opportunities.

“He has a chance to pursue professional football because of his size and length. His parents and the good Lord gave him his size, but his attitude is a day-to-day grind and he’s gotten better and better. I’m very pleased with where he is. He will do great things for us.”

“I’ve known Joe for five years and we are very close. We are both from the same area of North Carolina, so we went home together a lot when we were younger. It’s been great to watch him grow and mature in his change from defensive end to offensive tackle.

“Joe leads by example, along with Ryan Norton, and I’ve taken it upon myself to be more of the vocal leader. It’s awesome to have all three of us there leading the way.

“I don’t think Joe missed any summer workouts. He’s always at the front of the line, pushing the younger guys. He has really stepped up, especially with four freshmen in our group who don’t know the ropes. He’s really helped both Mitch Hyatt and Jake Fruhmorgen develop. He’s a great leader and we love him to death.”

Caldwell and Mac Lain are excited to see what Gore can do this year and are thrilled he is healthy.

“Finally, he can just play,” quipped Mac Lain. “He doesn’t have to worry about any of those injuries. It’s great to have him out there beside us. It’s awesome to see all three of us seniors out there.”

No one wants to see Gore succeed more than his position coach.

“I’m excited to see the joy on his face,” said Caldwell. “Every year, he would be doing really well and something would set him back. You love to see good things happen to good people. To see that happen for Joe is great.”