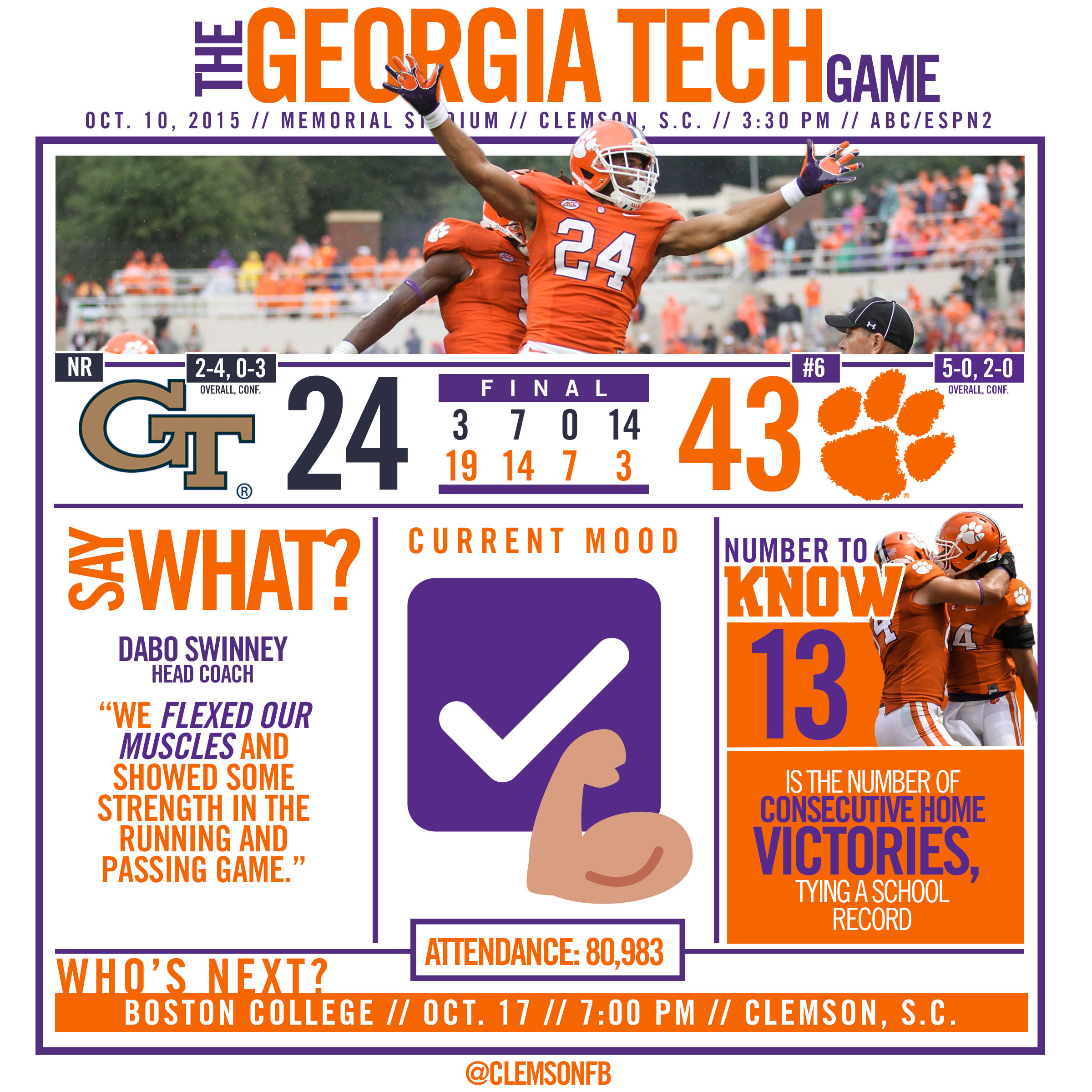 CLEMSON, S.C. – The No. 6 Clemson Tigers battled the rain for the second consecutive week, as they defeated Georgia Tech 43-24 at Memorial Stadium on Saturday afternoon.

Clemson’s offense rolled to 537 total yards of offense against Georgia Tech and was led by Wayne Gallman on the ground, who finished with 13 carries for 115 yards and two touchdowns. Clemson’s win marked Gallman’s third consecutive game with over 100 rushing yards, the first Tiger to do that since Andre Ellington in 2012. Clemson’s running game put on a strong performance yet again, as the Tigers finished with 201 yards on the ground.

Gallman provided an instant spark for the Tigers’ offense right out the gate, as he took a handoff and burst into the open field for a 66-yard touchdown run on the third play of Clemson’s opening possession. Gallman did not stop there, as he scored his second touchdown on a one-yard run late in the first quarter to cap off a 10-play, 80-yard drive that put the Tigers ahead 17-3.

The tide turned for Clemson yet again, as safety Jadar Johnson blocked a punt on special teams deep in Georgia Tech territory that resulted in a safety to give the Tigers a 19-3 lead.

The Tigers’ offense was hitting on all cylinders, as quarterback Deshaun Watson followed up last week’s game with one of his best performances on the year, as the sophomore was 21-30 passing for 265 and two touchdown passes, both of which were to tight end Jordan Leggett. Leggett has four touchdown catches this season.

Clemson’s defense came prepared for the option, as it held the Yellow Jackets, who came into the game averaging 310.6 yards per game on the ground, to 71 rushing yards. Cornerback Cordrea Tankersley nabbed his second interception of the season, while the Clemson defense finished with 11 tackles for loss. Linebacker Dorian O’Daniel and safety Jayron Kearse led the team in that category with three tackles for loss apiece.

The Tigers return home next week for their Homecoming matchup against the Boston College Eagles. Kickoff is set for 7:00 p.m., on Saturday on either ESPN2 or ESPNU.