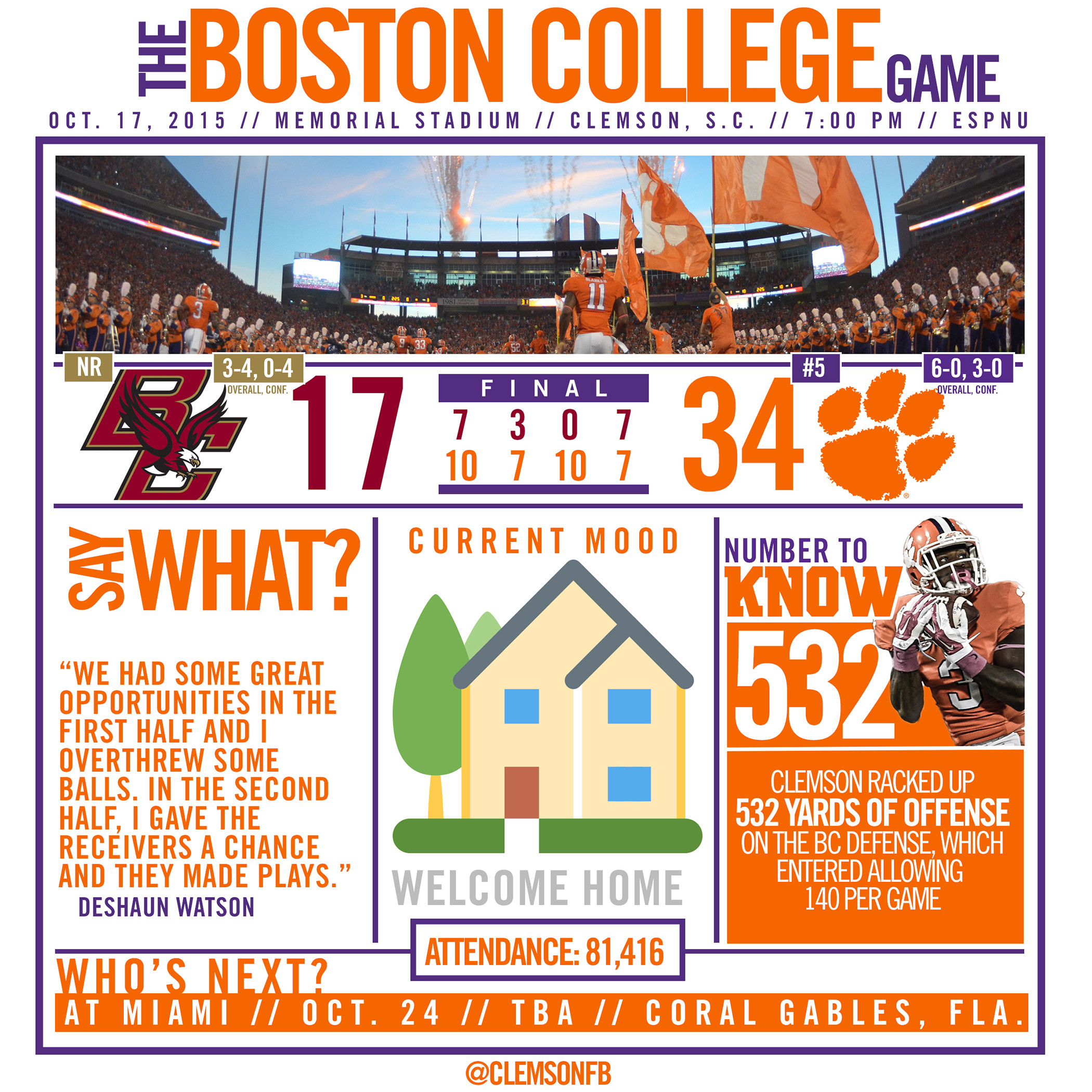 CLEMSON, S.C. – The Clemson offense was again on full display as the No. 5 Tigers downed the Boston College Eagles 34-17 in front of 81,416 fans at Death Valley on Saturday night. The win extended the Tigers’ home winning streak to 14 to set a school record. It was also Clemson’s 34th straight win over an unranked opponent.

Deshaun Watson passed for 420 yards and three touchdowns and rushed for another as the Tigers overcame the nation’s No. 1 defense. Sophomore wide receiver Artavis Scott finished with 10 receptions for 162 yards and a touchdown. The Tigers paved their way through the air against a stout Eagles secondary, as nine different Tigers caught a pass.

“There’s never been a group to win 14 games in a row (at home),” said head coach Dabo Swinney. “I’m so proud of these guys. I loved our guys’ mentality all night.

“I thought Tony (Elliott) and Jeff (Scott) called a great game. Hats off to our offensive staff and our guys for getting it done. We’ve got excellent leadership on this team, and they’ve truly bought in to the philosophy we have on this team. Our guys realize and believe wholeheartedly that we’re the best team, and it’s about how we prepare.

“I’m thankful for the juniors and seniors on this team. They know what it takes to be successful, and the leaders on this team are a tremendous group of guys who are really focused on what they’re doing.”

Senior running back Zac Brooks had another solid game for the Tigers, as he hauled in a 21-yard touchdown pass on fourth down midway through the second quarter to push the Tigers ahead 17-7. The touchdown reception was the second of Brooks’ career and his first since the Georgia game in 2013.

Clemson’s ability to break down a defense and put up yards in a hurry broke through in the second half when Watson connected with Scott on a 51-yard touchdown pass to cap off a six-play, 98-yard drive to increase the Tigers’ lead to 27-10.

Freshman wide receiver Deon Cain had a career-high 97 receiving yards, which included a 67-yard catch and run that set up a touchdown pass to tight end Jordan Leggett to widen the Tigers’ lead 34-10. Leggett has five touchdown catches on the year. The Tigers totaled the most rushing yards (112), passing yards (420), points (34) and total yards (532) against the Eagle defense in 2015.

Clemson will face Miami (Fla.) on Saturday in its next action.