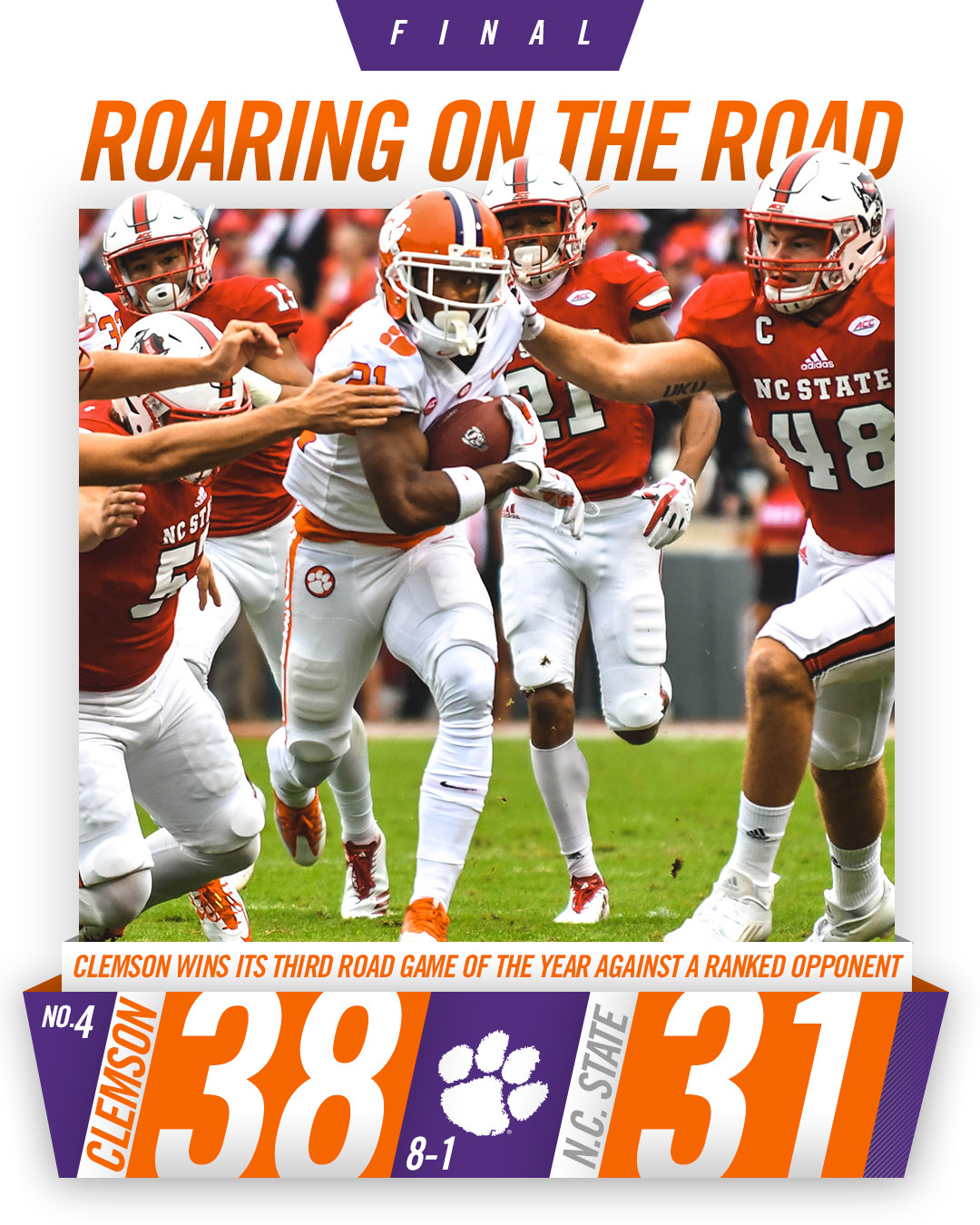 RALEIGH, N.C. – The No. 4 Clemson football team handed No. 20 NC State its first ACC loss of the year on Saturday, defeating the Wolfpack 38-31 at Carter-Finley Stadium on Saturday. With the win, Clemson improved to 8-1 overall and 6-1 in the ACC, while NC State slipped to 6-3 on the year and 4-1 in conference play.

Offensively, the Tigers were sparked by Deon Cain, who was Kelly Bryant’s favorite target and amassed 84 yards on a career-high nine catches, and Tavien Feaster, whose 89-yard rushing touchdown in the third quarter was tied for the third-longest run in Clemson history. Defensively, Ryan Carter had three pass breakups and hauled in a fourth-quarter interception that set up the Tigers’ final score of the game.

NC State got on the board less than two minutes into the contest, turning a Tim Kidd-Glass interception at the Clemson 40-yard line into a touchdown three plays later, when Ryan Finley connected with Kelvin Harmon for a 40-yard scoring pass. Clemson evened the score with nine minutes left in the first quarter on Ray-Ray McCloud’s 77-yard punt return touchdown, the Tigers’ first since 2014. Jaylen Samuels then gave the Wolfpack a 14-7 lead late in the first quarter on a one-yard scoring run.

The Tigers found the endzone less than a minute into the second quarter when Kelly Bryant ran for a 10-yard touchdown, bringing the score to 14-14. NC State regained the lead a few minutes later, as Finley connected with Samuels for a seven-yard touchdown that put the Wolfpack up 21-14. An Alex Spence 26-yard field goal cut the Wolfpack’s lead to 21-17 with five minutes remaining in the first half. Each team then went on to miss a field goal, and 21-17 was the score heading into the break.

Cain opened the third quarter scoring with only three and a half minutes left in it on a 12-yard scoring pass from Bryant, putting the Tigers up 24-21. As time was expiring in the quarter, Feaster broke loose for his 89-yard touchdown run, giving Clemson its largest lead of the game heading into the final quarter.

Finley found Jakobi Meyers for a 15-yard score just two and a half minutes into the fourth quarter, narrowing Clemson’s lead to three points. On the Wolfpack’s next drive, Carter’s interception allowed for the Tigers to drive down and retake a 10-point lead on Bryant’s second rushing touchdown of the day. A Kyle Bambard 22-yard field goal left Clemson’s lead at a touchdown with just under two minutes remaining in the game, and the game ended with K’Von Wallace intercepting Finley’s final pass with no time left on the clock.

Clemson returns home to face the Florida State Seminoles on Saturday at 3:30 p.m., in Death Valley.