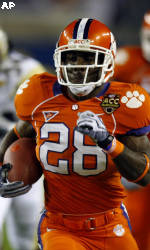 No. 25 Tigers Fall to Yellow Jackets in Title Game

Josh Nesbitt threw a 70-yard TD pass to DeMaryius Thomas and Scott Blair kicked a title game-record four field goals to help the Yellow Jackets (11-2) win the crown – Tech’s first since sharing it with Florida State in 1998 – in their second season under Johnson.

ACC player of the year C.J. Spiller rushed for 233 yards and four touchdowns for Clemson (8-5), which has lost two straight following a six-game winning streak that revived its season after a slow start.

Baker, the star of Georgia Tech’s three-point victory over Clemson during the regular season, kicked field goals of 48, 49, 28 and 40 yards. Dwyer ran for two TDs and Nesbitt ran for one for the Yellow Jackets, who rushed for 333 yards.

Georgia Tech marched 86 yards in 13 plays to regain the lead. Dwyer finished with 110 yards on 24 carries. Nesbitt, a distant second to Spiller for conference player of the year, rushed for 103 on 22 attempts.

The Yellow Jackets and Tigers were among the hottest teams in the country before stumbling against instate rivals Georgia and South Carolina to close the regular season.

Johnson and Clemson coach Dabo Swinney, however, scoffed at the notion that the losses to a couple of middle of the pack SEC teams took some of the luster off a matchup between the ACC’s highest scoring teams.

The title game appearance was the second for Georgia Tech, which failed to score a touchdown in a 9-6 loss to Wake Forest in 2006, and now has its first outright ACC championship since 1990 – the year before Clemson won the most recent of its league-record 13 crowns.

Spiller broke a 40-yard run on his second carry of the night. He went over 100 for the night and 1,000 for the season when he took a quick pitch and burst through an opening before racing 41 yards for his second touchdown.

Blair bailed Georgia Tech out twice after promising drives stalled in Clemson territory, both times with career-long field goals. He booted a 48-yarder after Roddy Jones dropped a deep pass on third down, then made a 49-yarder for a 13-7 lead after two false starts and a holding penalty pushed the Yellow Jackets back from the Clemson 7 to the 27.

Blair kicked three field goals and also threw a touchdown pass during Tech’s 30-27 victory over CLEMSON on Sept. 10 in Atlanta. The Yellow Jackets blew a 24-0 lead that night before winning on Blair’s 36-yarder in the final minute.

Spiller’s third TD cut Clemson’s deficit to 23-20, however Georgia Tech quickly rebuilt the lead to 10 points when Nesbitt – facing third-and-10 from his own 30 – found Thomas up the left sideline and the receiver outran the pursuit to finish his fourth reception of 70 or more yards this season.