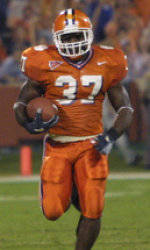 COLLEGE PARK, Md. (AP) – Put Clemson in a close game, and more often than not the Tigers will do precisely what it takes to win.

Such was the case Saturday against Maryland, and Clemson responded in typical fashion.

“We’re used to it,” said Tigers quarterback Charlie Whitehurst, who produced two touchdowns in the final eight minutes. “We do it every week.”

Reggie Merriweather scored his second touchdown on a 38-yard run with 2:58 remaining, capping a furious fourth-quarter rally that carried No. 25 Clemson to a 28-24 victory.

After a punt by Maryland, Whitehurst directed a 61-yard drive that concluded on Merriweather’s pivotal carry around right end on a third-and-7 play.

It was the eighth time in 13 games that Clemson was involved in a game decided by seven points or less. The Tigers have won six of those thrillers, including a 25-24 victory over Texas A&M last week.

“I think the team right now has the mentality that if we play hard for 60 minutes, something can happen to swing it our way,” coach Tommy Bowden said. “That’s hard to instill in a team.”

Maryland coach Ralph Friedgen knows this. His young team, which includes 72 sophomores and freshmen, withered with the game hanging in the balance.

“It’s a tough loss because we really had the game in hand,” Friedgen said. “Give credit to Clemson – they really took it to us in the fourth quarter. We’ve got to learn how to finish people.”

Whitehurst went 18-for-22 for 178 yards. With Clemson down by 10, he took the Tigers 86 yards in five plays, including an outstanding long pass to Baham that covered the final 51 yards.

“Perfect throw, right on the money,” Baham said. “It all boils down to execution. When you execute, that’s the result.”

Merriweather gained 75 yards on 10 carries, and James Davis ran for 82 yards on 20 attempts.

Maryland running back Mario Merrills, who ran for a career-high 149 yards in the opener against Navy, was limited to 21 yards on 15 carries. Entering the fourth quarter, he had 3 yards on 11 attempts.

Maryland finished with 56 yards on 40 attempts.

“The running game wasn’t there,” Friedgen said. “If we could have run the ball, we would have won.”

Clemson took a 14-10 lead in the third quarter on a 6-yard touchdown pass from Whitehurst to Baham. The 63-yard drive followed an interception by Tye Hill and was aided by two simultaneous personal foul calls against Maryland that totaled 30 yards.

The Terrapins came right back, using a 29-yard TD pass from Hollenbach to Davis to go up 17-14. The play capped an 80-yard drive in which Davis caught a 30-yarder on a third-and-7 from the Maryland 23.

After Clemson punted, Hollenbach deftly engineered a 63-yard drive in which he went 5-for-5 for 57 yards. After completing a 25-yard swing pass to tight end Dan Gronkowski on fourth-and-1 from the Clemson 31, Hollenbach averted pressure in the pocket and flipped a 3-yard TD pass to Joey Haynos, the sophomore’s first career reception.

But the lead wouldn’t last.

Clemson appeared stopped on its opening possession when Whitehurst fumbled a snap and inadvertently dropped to one knee on a third-and-3 from his 32. But Maryland’s William Kershaw was called for unsportsmanlike conduct, giving the Tigers a first down.

Merriweather ultimately concluded the 17-play drive with a fourth-down touchdown run from the 1. The Tigers held the ball for 9 minutes, 47 seconds – the longest drive in Clemson history.

The Terrapins answered with a field goal, then took advantage of a Clemson miscue to take a 10-7 lead.

The Tigers were prepared to punt when the snap soared over the head of Cole Chason, who chased down the ball and was tackled on his 2. On fourth down, Hollenbach scored on a sneak.

Maryland missed a chance to pad the margin when Hollenbach lost a fumble at the Clemson 15 with 4:26 left in the half.