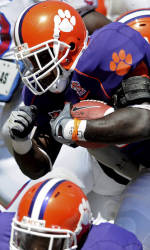 The senior tailback, the power part of Clemson’s “Thunder and Lightning” backfield rushed for three touchdowns to lead the 23rd-ranked Tigers (3-1) past South Carolina State 54-0 on Saturday.

Davis ran for 1,000 yards or more each of the past two seasons. He declared for the NFL draft in January before deciding to return to try for Clemson’s first Atlantic Coast Conference title since 1991.

But it had been a slow start for the powerful back. He had just one touchdown and had averaged less than 52 yards a game coming in. Davis knew he needed to do more.

“The coaches have been telling me all week I’ve got to be the one to set the tempo for this team,” Davis said. “That’s kind of what I tried to do.”

There was little the Bulldogs (2-2) could do to stop him.

Davis had runs of 23 and 25 yards on Clemson’s first series, which ended with his 1-yard TD burst.

He added scoring runs of 5 and 1 yard as the Tigers opened a 30-0 lead by halftime.

After Davis’ opening surge, “I tried to light my guys up, try to do everything I can to bring excitement out of my team,” he said.

It worked. Clemson cruised to its first shutout in two years and improved to 22-0 against Championship Subdivision opponents.

This one, though, figured to be tighter than most.

Clemson had either signed or looked hard at several of the Bulldogs standouts like runner Will Ford and receiver Phillip Morris. Clemson coach Tommy Bowden warned his players all week long they’d rarely see a FCS team like this one.

South Carolina State had no answer for Davis and the Clemson offense.

The Tigers’ defense did its part, too. They had three interceptions, one that Chris Clemmons brought back for a touchdown; held the Bulldogs to minus-9 yards rushing in the opening half and had a safety.

Two Cullen Harper first-quarter interceptions – only the second time since becoming Clemson’s starter in 2007 that he has thrown two picks in a game – kept things close for a while.

Davis and the Tigers, though, would not be stopped.

Davis’ second TD came from 5 yards. He added another score from a yard away to put Clemson ahead 21-0.

The Tigers added a safety one play later when the ball was snapped past South Carolina State quarterback DeWain Clark, who tried to illegally bat it forward out of the end zone.

Clemson added one more first-half score, this time Harper pounding it in from a yard to send the Tigers into the half ahead 30-0.

Davis finished with 95 yards while C.J. Spiller, the Tigers’ “Lightning,” ended with 63 of Clemson’s 189 yards rushing.

Things didn’t improve for South Carolina State after the break, Bulldog quarterback Malcolm Long getting intercepted by Clemmons for a 32-yard touchdown return four plays into the half.

South Carolina State, favored to win its Mid-Eastern Athletic Conference, didn’t have many positives in this one.

Ford, who rushed for a school-record 322 yards in last year’s finale against North Carolina A&T, ended with 14 yards on the ground.

Clemson rolled up 416 yards. The Bulldogs finished with 18 penalties, three times as many as the Tigers.

“You all saw it,” Bulldogs coach Buddy Pough said. “There isn’t much explaining to do. We were ugly.”

Their best chance to score came early, but Blake Erickson was wide right on his 39-yard field-goal try.

The Bulldogs, who got a $235,000 guarantee from Clemson, dropped to 0-4 against Bowl Championship Subdivision foes.

Clemson’s last shutout came in 2006, a 51-0 victory over Louisiana Tech. Things take a step up for the Tigers after this with Maryland on tap Saturday as they continue to build back confidence lost in an opening-week, 34-10 drubbing by Alabama.

“I think after week one, they’ve done all you can ask them to do,” Bowden said of his players. “I’d say right now, we’re right on track.”