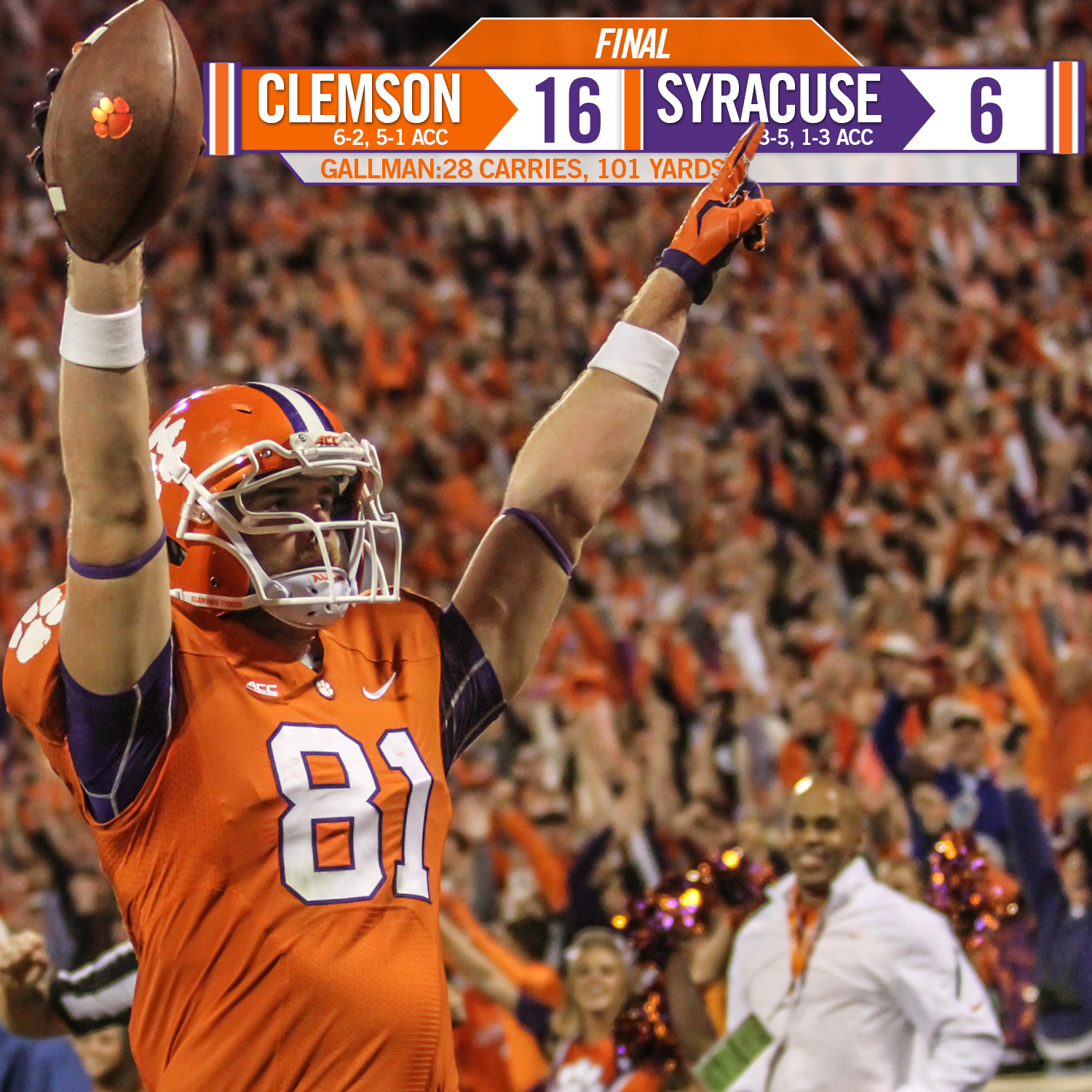 CLEMSON, S.C. – The Clemson defense dominated again and Wayne Gallman ran for 101 yards as the Tigers won another physical battle against Syracuse, 16-6, at Memorial Stadium. With the win, the No. 20 Tigers moved to 5-1 in the ACC, 6-2 overall and became bowl eligible.

“We keep finding ways to win,” said Head Coach Dabo Swinney. “As long as we have one more point than the opponent, that’s all that matters. We got it done.”

Gallman finished with a career-high 28 carries for 101 yards, the most rushing yards by a Tiger this season. Mike Williams led the Tigers in receiving yards with 72 and Artavis Scott led with seven receptions.

The Clemson defense played strong again, keeping the Orange off the scoreboard in the second half. The Tigers had four sacks, a significant accomplishment considering Syracuse had only allowed five sacks entering the game.

The Tigers had 12 tackles for loss and held Syracuse to 3-16 on third down. The defense also forced three turnovers, with interceptions by safety Robert Smith and linebacker Stephone Anthony along with a recovered fumble by cornerback Mackensie Alexander. The caused fumble was the first by Syracuse in over 278 snaps, which dated back to its September 20 game against Maryland.

The homecoming crowd was electric and the support was appreciated by the team.

“It’s really special when you can go out on defense and everyone gets loud and cheers for you,” said Grady Jarrett. “It’s a very satisfying feeling to know the amount of support we have to get the ball back for our offense.”

In a low-scoring affair, special teams continued to be a solid contributor for the Tigers. Ammon Lakip was 3-3 on field goals. The junior has now made 13 of his 14 field-goal attempts at home.

“It’s not often that you’re minus in the turnover margin and still win,” said Swinney.

The biggest drive for the Clemson offense came in the second half, when Cole Stoudt orchestrated a seven-play, 73-yard drive, capped by a 19-yard touchdown pass to Stanton Seckinger in the fourth quarter to give the Tigers a 16-6 lead.

“We got the running game going, improved on some things and made key plays in the second half,” said Stoudt.

The seniors recorded their 25th ACC win, the most ever by a Clemson class.

The Tigers have an open date next week and travel to Wake Forest on Thursday, November 6 for their next game.

“Physically, I’m going to give the team a couple days off,” added Swinney. “We have two road games coming up, so we need to get dialed back in.”

[View the story “#CUSEvsCLEM” on Storify]