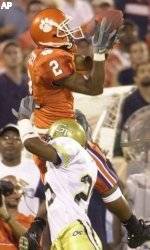 No. 20 Clemson Falls To Georgia Tech In 28-24 Heartbreaker

CLEMSON, S.C. (AP) – Reggie Ball threw an 11-yard touchdown pass to Calvin Johnson with 11 seconds left to give Georgia Tech a 28-24 win over No. 20 Clemson on Saturday night.

Johnson, a freshman, reached high over the Tigers’ Justin Miller just inside the goal line near the left sideline to haul in his third touchdown of the game.

The winning score came a play after Clemson’s Geoff Rigsby fourth-down snap skipped pass punter Cole Chason, who had to fall on the loose ball deep in his own territory.

The Tigers (1-1, 1-1 Atlantic Coast Conference) still had one more chance. Airese Currie returned the kickoff to the Georgia Tech 31 with 3 seconds to go. But Charlie Whitehurst’s pass to Kelvin Grant fell incomplete as three Yellow Jackets swarmed the receiver in the end zone.

The Yellow Jackets would have been out of it without the Johnson and Ball. They connected for an 8-yard touchdown pass with 1:50 left.

But Georgia Tech didn’t come near recovering the onside kick and the game looked lost, especially after Whitehurst ran for 9 yards on a keeper on the next play.

But the Yellow Jackets stopped the Tigers for no gain twice, forcing Clemson to punt.

Rigsby’s snap never got any height and skipped right past Chason, who just fell on it at the Tiger 11.

The stunned crowd at Death Valley didn’t even have time to collect its breath before Ball found Johnson for the winning score.

Johnson caught eight passes for 127 yards and scored three touchdowns in only his second game.

Ball, who suffered through a miserable 19-of-42 performance in Georgia Tech’s 39-3 loss to Clemson last year, completed 20 of 36 passes for 251 yards and four touchdowns. P.J. Daniels, the ACC’s leading rusher last year, ran for 103 yards on 24 carries after being held to just 34 yards against the Tigers in 2003.

Whitehurst was 20-of-43 for 275 yards, while Grant and Currie each caught six passes for 80 yards.

Clemson appeared to have sealed the game twice in the fourth quarter with two long touchdown runs by seldom used tailbacks.

Kyle Browning’s 54-yard touchdown run straight up the middle untouched gave the Tigers a 24-14 lead with just over three minutes to go.

The sophomore’s run came just more than a minute after the Yellow Jackets had cut the Tigers’ lead to a field goal with a lightning-quick drive that ended with a 19-yard scoring pass from Ball to Levon Thomas with 4{ minutes to go.

Just a few minutes earlier, Reggie Merriweather appeared to have sealed the game with a 62-yard scoring bolting untouched through another big hole on third-and-1 to put Clemson ahead 17-7.

Merriweather, who was in for only two plays and never carried the ball in last week’s opener against Wake Forest, led the Tigers with 90 yards on eight carries. Browning, who didn’t have a single carry against the Demon Deacons, had 80 yards on five carries.