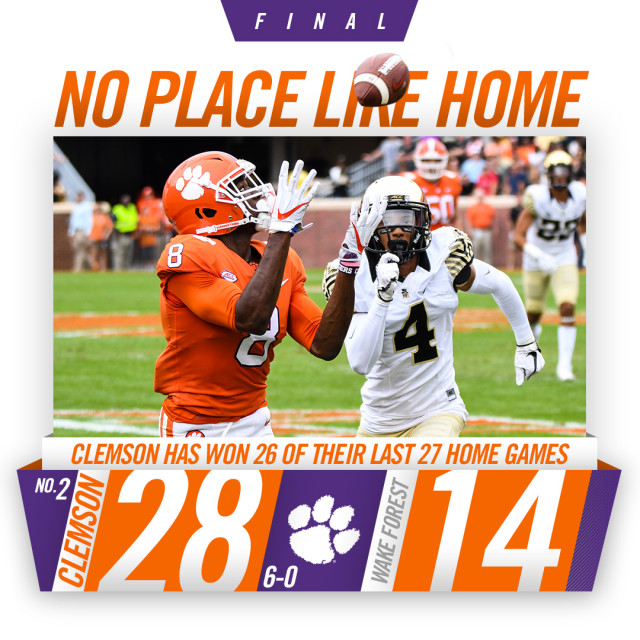 CLEMSON, S.C. – The No. 2 Clemson Tigers continued their undefeated season in Saturday’s homecoming matchup against Wake Forest, defeating the Demon Deacons 28-14 at Death Valley. With the win, Clemson improved to 6-0 overall and 4-0 in the ACC, while Wake Forest dropped to 4-2 overall and 1-2 in conference play.

Offensively, Kelly Bryant, Zerrick Cooper and Hunter Johnson split time at quarterback for the Tigers, with Bryant completing 21 of 29 passes for 200 yards and a touchdown. Johnson went 5-for-5 for 42 yards and a touchdown, marking the freshman’s first career scoring pass. Austin Bryantpowered the defensive performance, garnering two of Clemson’s eight tackles for loss, and Tanner Muse led the team with eight total tackles.

The Tigers scored on the opening drive of the game when Bryant connected with Deon Cain for a 28-yard touchdown just two minutes into the first quarter. Six minutes later, Clemson found the endzone again on a four-yard scoring run by Adam Choice. One missed field goal attempt by each team later, and the Tigers took a 14-0 lead into halftime.

The Demon Deacons missed another field goal to start the second half, and then Clemson upped its lead to 21-0 midway through the third quarter when Travis Etienne ran in a one-yard touchdown. Johnson found Cannon Smith in the endzone early in the fourth quarter for both players’ first career touchdown, giving Clemson a 28-0 lead.

Wake Forest scored its first points with just over eight minutes remaining in the game on a 16-yard touchdown pass from Kendall Hinton to Scotty Washington. Hinton threw an 11-yard touchdown pass to Cam Serigne six minutes later, doubling the Demon Deacon point total and putting the final score at 28-14 in favor of the Tigers.

Clemson next travels to Syracuse for a Friday night matchup with the Orange. The game is set to kick off at 7 p.m. and will be televised on ESPN.