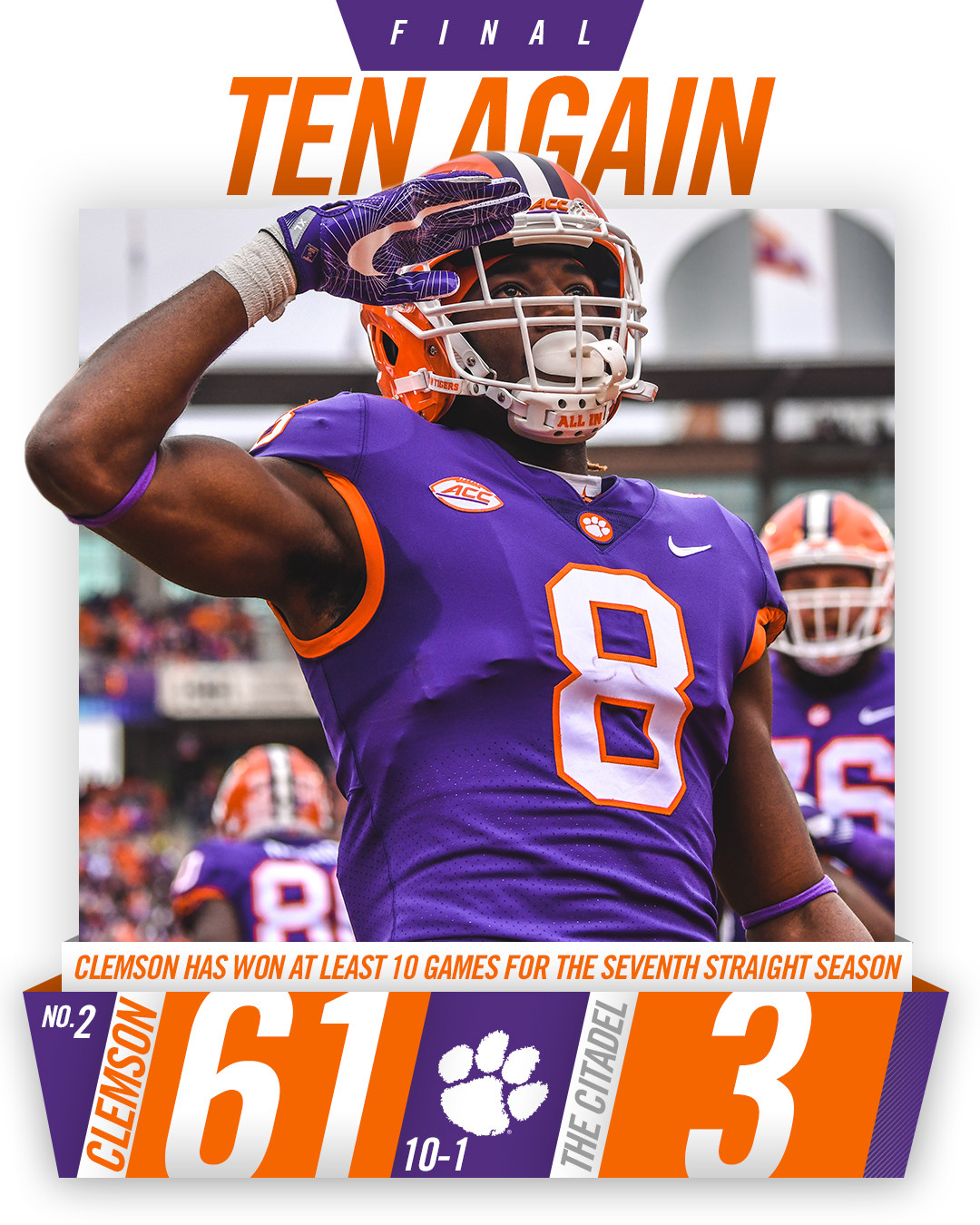 CLEMSON, S.C. – The No. 2 Clemson football team finished its 2017 slate of home games undefeated by defeating The Citadel 61-3 on Saturday in Death Valley. With the win, Clemson improved to 10-1 overall, while The Citadel fell to 5-6.

The Clemson defense held The Citadel to just 216 yards compared to the Tigers’ 662. The Tiger offense was led by Travis Etienne and Tee Higgins, who accounted for four of Clemson’s touchdowns. Higgins amassed 178 yards on six catches, while Etienne rushed for 62 yards on eight carries.Kelly Bryant was 17-22 passing for 230 yards and three touchdowns.

Bryant connected with Deon Cain for a 53-yard touchdown to open the scoring with just over eight minutes left in the first quarter. A Trayvon Mullen acrobatic interception at midfield on The Citadel’s next drive set up Clemson’s second touchdown of the day, an Etienne six-yard rush. The Tigers took a 21-0 lead with less than a minute remaining in the first quarter when Bryant found Hunter Renfrow for a 12-yard score.

T.J. Chase hauled in the Tigers’ first touchdown of the second quarter, a 13-yard pass from Bryant with 12 minutes remaining in the first half. Six minutes later, an Alex Spence 26-yard field goal brought the score to 31-0, and Higgins caught a 32-yard touchdown pass from Zerrick Cooper through traffic as time was expiring to bring the halftime score to 38-0.

Tavien Feaster gave Clemson a 45-point advantage on the very first play of the second half, rushing 61 yards from scrimmage for a score. Etienne then rushed seven yards for his second score of the day, and Hunter Johnson found Higgins for a 78-yard touchdown to complete the third quarter scoring with Clemson leading 58-0.

The Tigers go on the road to face their rival South Carolina next Saturday. Kickoff is scheduled for 7:30 p.m., at Williams-Brice Stadium.