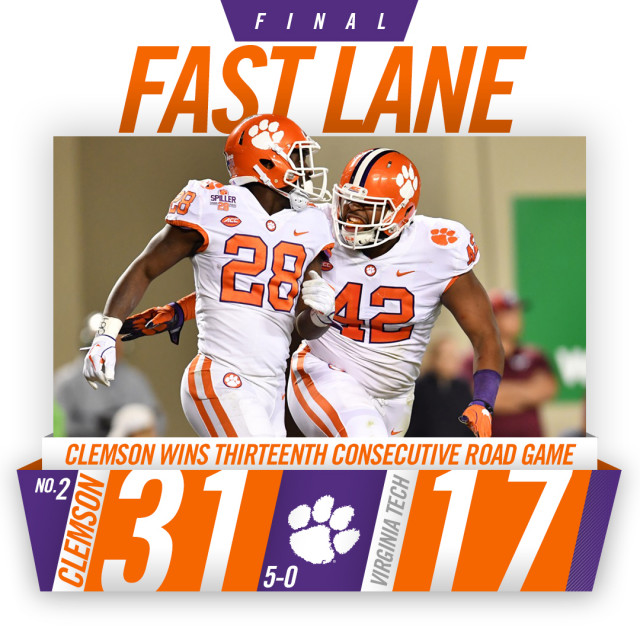 BLACKSBURG, VA. – Capped off by fourth quarter interceptions by Dorian O’Daniel and Austin Bryant, the No. 2 Clemson Tigers defeated the No. 12 Virginia Tech Hokies 31-17 at Lane Stadium on Saturday night. With the win, Clemson remained undefeated at 5-0 on the year and 3-0 in the ACC, while Virginia Tech dropped to 4-1 overall and 2-1 in conference play.

Offensively, the Tigers were led by Kelly Bryant, who threw for 186 yards and a touchdowns on 12 completions. Bryant also rushed for 94 yards on 19 carries. O’Daniel piloted the Tiger defense, recovering a Hokie fumble, returning an interception 22 yards for his second pick-six of the season and amassing 10 tackles, including one of the Tigers’ two sacks.

Clemson struck first, holding Virginia Tech to a three-and-out on its first drive before taking a 3-0 lead on an Alex Spence 23-yard field goal just over five minutes into the first quarter. After the Tiger defense forced another three-and-out on the ensuing Hokie drive, Clemson took a 10-0 lead on a Tavien Feaster 60-yard touchdown reception, the running back’s first career receiving score.

The Hokies put their first points on the board with three minutes left in the second quarter on a Joey Slye 43-yard field goal that cut Clemson’s lead to 10-3. The Tigers scored the last points before halftime, though, finishing a drive in which Deon Cain mustered 55 receiving yards with a C.J. Fuller one-yard touchdown run. Virginia Tech attempted and missed a 45-yard field goal as time expired in the first half, and Clemson took a 17-3 lead into the break.

The Tigers also opened the second half scoring, as Feaster gave the Tigers a 24-3 lead on a one-yard rushing score after O’Daniel recovered a Hokie fumble. The Tigers maintained that lead entering the final quarter, as the defense stopped a Virginia Tech fake field-goal attempt in the final seconds of the third quarter.

Virginia Tech narrowed the Clemson lead to 24-10 a minute into the first quarter when it scored its first touchdown, a Sean Savoy two-yard run. O’Daniel’s pick-six came on the Hokies’ next drive, putting the Tigers up 31-10. The Hokies scored the final points of the matchup with less than two minutes left in the game on a Josh Jackson 30-yard touchdown pass to Savoy.

Clemson returns to Death Valley for its homecoming matchup with Wake Forest at noon next Saturday.