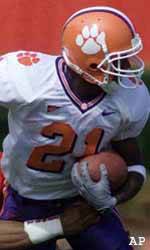 RALEIGH, N.C. – Woodrow Dantzler is in search of the perfect football game. The Clemson quarterback might have found it Saturday.

Three weeks after getting booed in a home loss to Virginia, Dantzler broke a 54-year-old Clemson record by accounting for six touchdowns as the No. 16 Tigers overcame 20 penalties to beat North Carolina State 45-37 Saturday.

“We played as a unit and we would not be denied on offense,” said Dantzler, who has 1,127 yards in three games against the Wolfpack. “Every time we went on the field we were looking to score and that’s the attitude we took. It showed up on the field.”

Dantzler was nearly perfect for the Tigers (4-1, 2-1 Atlantic Coast Conference). He completed 23 of 27 for 333 yards and added 184 on the ground to break his own single-game total offense mark and record the fifth-best total in 49 years of ACC football.

“He put on a display out there today that I don’t know if we’ll ever see again in this stadium,” N.C. State coach Chuck Amato said. “I hope not by an opposing quarterback.”

Three other Clemson players had five touchdowns in a game, the last being Bobby Gage in 1947 against Auburn.

With no clear-cut Heisman Trophy candidate, Dantzler’s efforts the last few weeks may push his name to the top of the list.

“I think the award needs to be won on the field,” Clemson coach Tommy Bowden said. “Performances like this will definitely get out. This will get people’s attention. He’s had 300, 400 and 500 yard games his last three.”

Dantzler had 418 yards of total offense two weeks ago in a 47-44 victory at No. 15 Georgia Tech and 610 in two previous games against the Wolfpack prior to Saturday’s outburst.

The two road wins by the Tigers came after a disappointing 26-24 loss to Virginia in which Dantzler was intercepted twice and fumbled once.

“I knew (the criticism) was out there,” Dantzler said. “This is America, people are entitled to their opinions. The only people I have to play for are my coaches and my teammates. I proved it to them and that’s it.

“I sit back everyday and think of that (Virginia) game. Maybe we needed to lose that game because we weren’t playing with the focus and intensity we needed to be competitive in this league.”

Dantzler might have saved his best effort for late in the third quarter after the Wolfpack had closed to 35-23, leading the Tigers on a 92-yard scoring drive.

Dantzler set up his career-best fourth TD pass with a spectacular scramble that capped Clemson’s 21-point quarter. He appeared trapped in the backfield, but broke free and then made four Wolfpack defenders miss as he crossed the field and raced 41 yards. Two plays later, he hit a wide open Chad Jasmin for Clemson’s sixth TD.

“He’s not only the best quarterback in the ACC, he’s the best running back we’ve seen,” added Wolfpack linebacker Brian Jamison.

N.C. State’s defense was hurt by the loss of linebacker Levar Fisher, the ACC tackling leader who strained his left knee early in the third quarter and didn’t return.

But Clemson was called for 11 first-half penalties and made several crucial mistakes that allowed the Wolfpack to stay close.

Dantzler’s 55-yard scoring run on the game’s fourth play put the Tigers up 1:24 in. And Clemson was driving for another score on its next possession before a series of blunders.

A holding penalty at the N.C. State 20 denied the Tigers a first down. Then a pair of sacks cost Clemson a combined 24 yards before Henry Owen’s snap rolled past punter Wynn Kopp, who was forced to fall on the ball at the Clemson 9.

Philip Rivers threw his first of two scoring passes to Jerricho Cotchery two plays later to tie it up.

A Travis Zachery fumble near midfield set up N.C. State’s next score late in the first quarter.