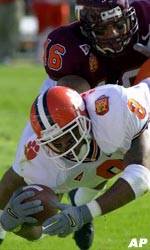 JACKSONVILLE, Fla. – If the Gator Bowl was the final game of quarterback Michael Vick’s career at Virginia Tech, he went out a winner.

Vick threw for one touchdown and ran for another, and Lee Suggs ran for three scores Monday as the sixth-ranked Hokies beat No. 16 Clemson 41-20.

“It felt like the old me out there,” Vick said after passing for 205 yards, running for 19 and being named the game’s most valuable player.

The sophomore quarterback, who is still trying to decide whether to return to the Hokies next season or turn pro, said he’ll use the time between now and the Jan. 12 deadline to consider his options.

“I haven’t set a timeline,” he said. “I realize I have a couple of days to think about some things and make my decision, what I’m going to do. I’m going to take advantage of those next six or seven days.”

Coach Frank Beamer said he and Vick plan to find out more about his situation, then meet. He also said he wants to look into other ways to secure Vick’s future without having him leave before he’s ready.

Vick certainly was ready for the Tigers.

In a game billed as a quarterback duel between Vick and the Tigers’ Woody Dantzler, both made plenty of dazzling plays, but an early mistake helped get the Hokies off to a fast start.

After failing to make a first down on the opening series, Tigers punter Jamie Somaini couldn’t handle a bouncing snap. He finally gained control and tried to run, but was tackled for an 8-yard loss at his 23.

On the first play, Vick hit a wide open Jarrett Ferguson with a bullet down the middle, giving the Hokies a 7-0 lead after just 1:37.

“Any time you’re in a big game like that, it’s imperative that you get off to a good start,” Hokies tailback Andre Kendrick said. “We got a lucky break and we capitalized. It set the tone for the rest of the day.”

Vick’s 6-yard run at the end of the quarter made it 14-0, and the Hokies were on their way despite Dantzler’s best efforts.

Dantzler, compared to Vick all season, passed for 180 yards and a touchdown, ran for 81 yards and was hammered repeatedly before leaving after the third quarter. Willie Simmons finished and was hit hard too.

Dantzler had become a near one-man show for the Tigers (9-3) after tailback Travis Zachery broke his foot scoring a touchdown. The 23-yard pass made it 14-7 early in the second quarter, but ended Zachery’s day.

Virginia Tech (11-1), which played for the national championship last season, led 21-10 at halftime and kept grinding out yards. The Hokies finished with 211 rushing yards to 88 for the Tigers, mostly Dantzler.

“Even when we were down 14-0, I thought we could come back,” said Rod Gardner, who had seven catches for 94 yards and became the Tigers career receptions leader with 166 catches. “Two quick scores and we’re right back in it. But they got a couple more and it just got away from us.”

Suggs rushed for 73 yards and scored on a 3-yard run 2:26 before halftime, a 1-yard dive in the third quarter and a 5-yard burst in the final quarter, boosting his touchdown total to 31 for the season.

Suggs tied six others for the Gator Bowl record for touchdowns in a game, and exceeded the school’s career record of 30 touchdowns this year.

Dantzler, replaced by Simmons for the fourth quarter, was 15-of-32 and was sacked three times. Simmons also was hit hard, getting sacked on his first two plays by Jim Davis for minus 18 yards.

The victory was the first in three bowl trips for the Hokies. The loss was Clemson’s fifth straight in a bowl game and fourth in eight trips here.