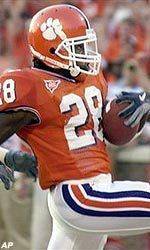 CLEMSON, S.C. (AP) – Charlie Whitehurst threw an 11-yard touchdown pass to Kyle Browning in the second overtime that lifted No. 15 Clemson to a 37-30 victory over Wake Forest on Saturday.

The Tigers (1-0 Atlantic Coast Conference) led 19-3 early in the second quarter and looked intent on beating the Demon Deacons as thoroughly as Clemson got beat in a 45-17 defeat at Wake Forest a season ago.

The Tigers rediscovered their offense when it counted.

Whitehurst, starting at his 22 with 6:35 left, completed passes of 16 and 19 yards to Chansi Stuckey, then hit Airese Currie with an 8-yard completion to get inside Wake’s 10. A pass interference call on fourth-and-goal kept the drive alive and Yusef Kelly leaped over the pile from a yard out with for Clemson’s first points in nearly 40 minutes.

Kelvin Grant pulled down the tying conversion on a perfectly lofted ball into the left corner of the end zone to send things into overtime.

The teams traded field goals in the first extra session. Then Whitehurst found Browning on a screen pass to give Clemson the lead.

Wake Forest could not respond.

Jason Anderson juggled a pass out of bounds. Chris Barclay, who ran for 179 yards, was stopped at the line of scrimmage. And Cory Randolph’s final two throws went incomplete.

Many in the crowd of 79,500 rushed the center of the field as Memorial Stadium’s new remote-control collapsible goalposts worked to perfection, coming down in seconds.

The excitement shows how seriously Clemson takes Wake Forest these days. Only once in 55 contests since 1948 had Wake won back-to-back games in the series. But after Barclay slipped through a pile at the line of scrimmage on the way to his touchdown, it looked like Wake was on its way.

At least until Whitehurst got the team moving.

Whitehurst finished 20 of 41 for 288 yards, two touchdowns and two interceptions. Currie caught nine passes for 152 yards while Stuckey, a converted quarterback, had eight receptions for 112 yards.

The Tigers came out like a team looking for revenge from last year’s debacle, which nearly cost Clemson coach Tommy Bowden his job. But after a four-game winning streak to end the season – and a longterm contract for Bowden – the Tigers wanted to pay back the last team that beat them.

They opened with Currie’s 31-yard TD catch and Justin Miller’s 69-yard punt return for a score in the first quarter.

Clemson’s plans took a hit when Wake Forest rallied and kept the Tigers off the scoreboard through an uncomfortably long stretch for the Death Valley fans.

Wake freshman Ben Mauk launched a high, floater over the middle that Jason Anderson caught for an 85-yard touchdown. The Demon Deacons did things their preferred way the next time they got the ball, rushing seven times for 37 yards and ending with Cornelius Birgs 2-yard dash through the middle for a touchdown to close things to 19-17.