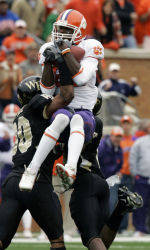 WINSTON-SALEM, N.C. (AP) -C.J. Spiller ran 72 yards for the go-ahead touchdown and defensive lineman Gaines Adams returned a fumble for a score to spark No. 15 Clemson’s rally from 14 points down in the fourth quarter of a 27-17 victory over Wake Forest on Saturday.

Adams started Clemson’s comeback when he returned a fumble 66 yards for the momentum-changing score on the first play of the fourth quarter.

Will Proctor was 20-of-30 passing for 214 yards and a touchdown, and Clemson overcame his fumble and three interceptions by scoring 24 points in the fourth quarter and making all the plays that mattered.

Wake Forest led 17-3 entering the final 15 minutes and looked to extend its lead to 17 when Sam Swank lined up for a 42-yard field goal.

But holder Jon Temple had trouble with the snap and Adams drilled him at the 34. The ball came loose and Adams returned it 66 yards for a touchdown to pull Clemson to 17-10.

The Tigers forced Riley Skinner to fumble on the Deacons’ next possession. Five plays later, Proctor tied it at 17-all with a 20-yard touchdown pass to Aaron Kelly.

Spiller then all but sealed it when he took a handoff at the 28, ran through Chip Vaughn’s tackle and sprinted down the right sideline into the end zone.

Skinner was 18-of-23 passing for 169 yards, and he threw for one touchdown and caught another on a trick play.

But Clemson wouldn’t be denied in its bid to end a two-game losing streak at Groves Stadium.

The Tigers were embarrassed in losses at Wake Forest in 2003 and last season, and vowed in their latest trip to Winston-Salem that they had something to prove.

But for the first three quarters, the Demon Deacons – who entered as nearly 17-point underdogs – mostly were in control.

Skinner put Wake Forest ahead 7-3 with a 6-yard touchdown pass to Willie Idlette, then pushed the lead to 11 early in the second quarter when he caught a 19-yard score from quarterback-turned-receiver Nate Morton.

Swank pushed the Demon Deacons’ lead to 17-3 with a 22-yard field goal.