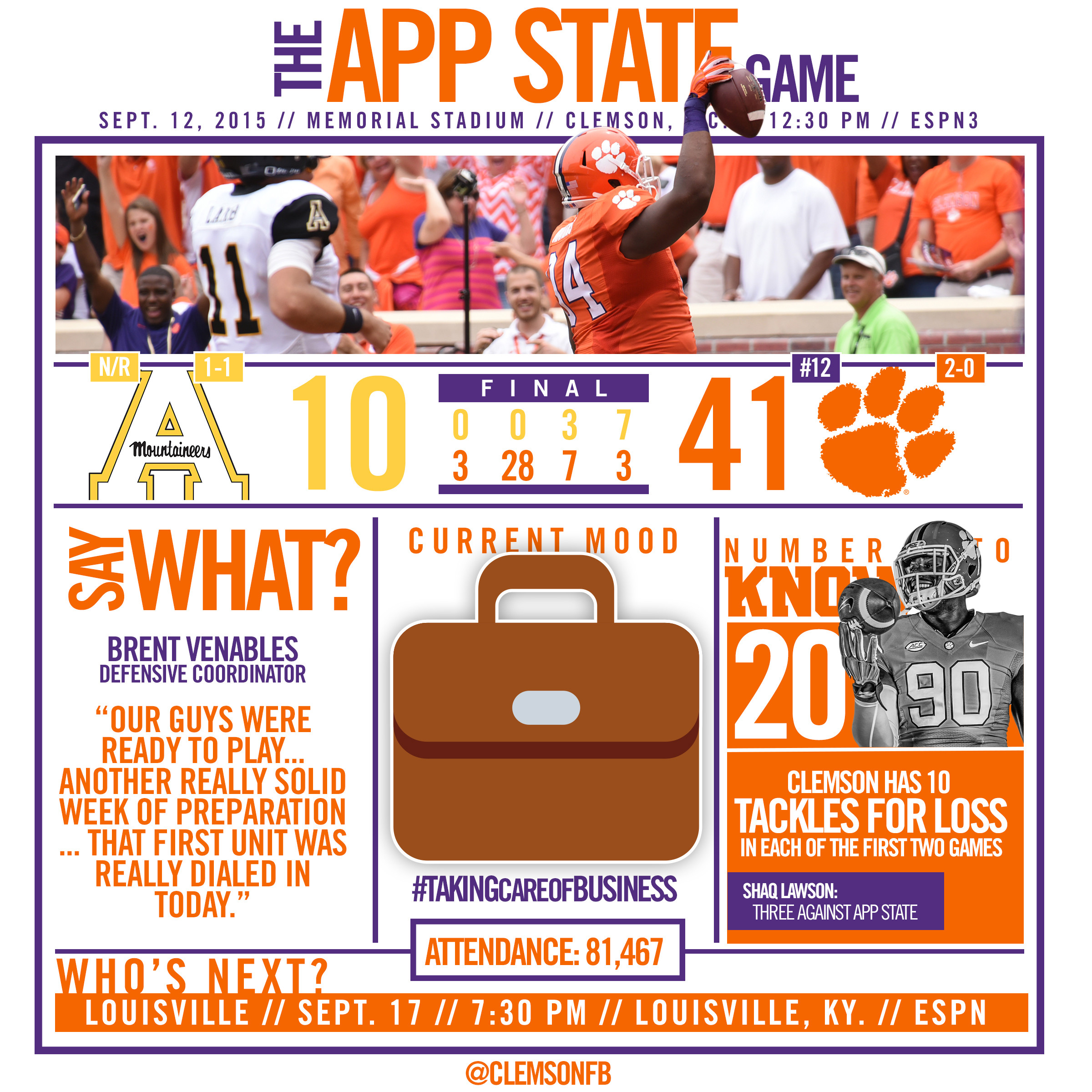 CLEMSON, S.C. – A second-quarter flurry proved to be all the No. 12 Clemson Tigers needed to defeat the Appalachian State Mountaineers 41-10 on Saturday in front its second-straight sellout crowd at Memorial Stadium.

“This was a very solid win and brought us something we could learn from,” said head coach Dabo Swinney. “The fans’ energy and volume level was really feeding the defense and helped light that spark.”

Deshaun Watson was 19-26 passing for 248 yards and three touchdowns. Wayne Gallman led the Tigers’ ground game with 79 of the team’s 140 rushing yards. Defensively, Shaq Lawson had three tackles for loss. The Tigers added three interceptions that completely changed their momentum, part of four takeaways for Clemson.

Clemson’s defense was stout, holding Appalachian State to 298 total yards, including only 95 passing yards. In a critical moment, safety Jayron Kearse intercepted a pass in the endzone, giving the Tigers the ball and keeping Appalachian State off the scoreboard late in the first quarter.

After a slow first quarter, defensive tackle Carlos Watkins intercepted a quick pass over the middle by Taylor Lamb and returned it into the endzone to score the Tigers’ first touchdown. Watkins’ first career touchdown lit a fire under Clemson and started a scoring streak for the Tigers, who reeled off 35 consecutive points.

On the oppositive side of the ball, defensive coordinator Brent Venebles was happy with his unit’s performance throughout the game.

“Our guys were ready to play. I am really pleased at the point of attack. We knew we needed to make big plays and capitalize as a team.”

The Tigers came up with their third interception by linebacker Ben Boulware. His third career interception set Deshaun Watson and the offense up for a touchdown to Charone Peake, a beautiful 24-yard pass in the second quarter.

However, Peake and Watson were not done. Peake caught a 59-yard touchdown pass by Watson, his longest career reception, to score his second touchdown of the day. It was also Peake’s first-ever two-touchdown game.

The Tigers face a quick turnaround as they head to Louisville on Thursday night. The game will be on ESPN with kickoff set for 7:30 p.m.