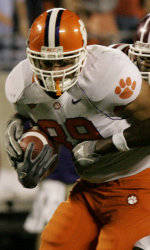 CHARLOTTE, N.C. (AP) -With games the next two weeks against ranked teams, Clemson coach Tommy Bowden got exactly what he wanted against overmatched Temple.

James Davis ran for 138 yards and three touchdowns on nine carries – all in the first half – to help No. 12 Clemson rout Temple 63-9 on Thursday night.

Will Proctor threw for 150 yards and two touchdowns for Clemson (6-1). The Tigers scored touchdowns on their first nine possessions and had 559 yards offense in their fifth straight win.

“When our first group was in there, we pretty much shut them down,” Bowden said. “We didn’t have any injuries tonight.”

Davis, Proctor and most of the starters sat out the second half, when fourth-string running back Chris Chancellor ran for 114 yards and a TD as the Tigers set a school record by scoring over 50 points for the fourth time this season. But the opponents; North Carolina (99), Florida Atlantic (108), Temple (114) and Louisiana Tech (118), rank among the worst defenses of the 119 schools in Division I-A.

Things get tougher for Clemson the next two weeks with games against No. 13 Georgia Tech and No. 22 Virginia Tech.

“The next couple of weeks are going to be real tough,” Davis said. “We’ve got to really get down to details. It’s going to be physical. We have to be ready for anything.”

Davis had his way with Temple, with touchdown runs of 8, 3 and 64 yards. Proctor threw a 6-yard TD pass to Alex Pearson and a 55-yarder to Jacoby Ford as Clemson built a 49-3 halftime lead.

The Tigers held the Owls to 221 yards. Gaines Adams had a sack, tying a school record by recording at least one sack in his fifth straight game. He then enjoyed the second half from the sideline.

“It was a great game to have,” Adams said. “Younger guys came out and got the jitters out.”

Vaughn Charlton was 13-of-25 for 110 yards and threw a fourth-quarter touchdown pass to fellow freshman Steve Maneri, and Tim Brown ran for 121 yards for the Owls (0-7), who extended the nation’s longest losing streak to 19 games.

“Obviously a team that is too big, too strong too fast and too tough for that at this stage and that’s the truth,” Temple coach Al Golden said. “People may not want to hear it, but that’s the truth. Our kids didn’t quit.”

Temple, which came in with the country’s second-worst offense at 197.2 yards per game, scored first. Travis Shelton, touching the ball for the first time since he was a freshman in 2004, returned the opening kickoff 53 yards. On the next play, Shelton gained 30 yards on a reverse, setting up Jake Brownell’s 27-yard field goal.

But Ford took the ensuing kickoff 49 yards and the Tigers quickly took control. Clemson was scoring so quickly – no touchdown drive was longer than seven plays in the first half – that Temple had a 3-minute edge in time of possession in the first half.

Shelton, who hadn’t played for what is believed to be disciplinary reasons, also had a 73-yard kickoff return. He finished with four returns for 205 yards, a school record.

“We’re optimistic. We’re not sad our down on ourselves,” Shelton said. “We know what we have in the future. We have a young team and we’re building.”

The game was a Temple home game, but the school moved it for financial reasons to Bank of America Stadium, 130 miles from Clemson’s campus. A crowd of only 30,246 showed up to watch Temple, which has been outscored 308-50.

“This game played out exactly like we wanted it to,” Proctor said. “The offense has a great deal of confidence.”

Before the game Temple’s players donated $1,500 – which included the players’ per diem and donations from staff members – to Fahmarr McElrathbey Trust. It was set up to help Clemson cornerback Ray Ray McElrathbey, who is raising his 11-year-old brother while their mother battles a drug addiction.

“We had an opportunity to help someone that’s in a jam. That’s something we’re trying to teach our kids as we build this program,” Golden said.