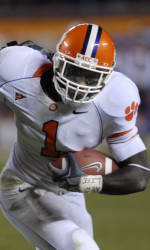 Virginia Tech (6-2, 3-2 Atlantic Coast Conference), beaten soundly in its last two ACC games by Georgia Tech and Boston College, showed the Tigers what it felt like.

Clemson (7-2, 4-2) had just three first downs in the last three quarters, and the third one came in the final minute, not long before the final gun sounded and Hokies fans streamed onto the field, surrounding the team and celebrating around midfield.

Ore carried a career-high 37 times for his second consecutive 200-yard performance. He had 207 five days earlier in a rout of Southern Mississippi, and this time upstaged the Tigers’ vaunted two-back tandem of James Davis and C.J. Spiller. They came into the game averaging 185 yards between them, but finished with just 71 yards on 22 tries.

The Hokies, leading 10-7 at halftime, padded their lead early in the third quarter after Xavier Adibi intercepted Will Proctor’s pass at the Clemson 35. Ore did the rest, carrying on five consecutive plays, the last an 11-yard, second-effort run for the TD.

Later in the period, he essentially put the game away, breaking off a 21-yard run to get the ball inside the Clemson 5, then carrying two more times to get it to 24-7. Sam Wheeler also had a big play in the drive, a 41-yard reception from Sean Glennon.

Glennon came in expecting to yield to Ike Whitaker at times to boost the running game, but it never happened. Glennon finished 9-for-15 for 108 yards and ran for a TD.

The Hokies dominated the second quarter on defense and led 10-7 at halftime.

Clemson ran just 12 plays – for 21 yards – in the quarter as Virginia Tech kept the ball for nearly 10 minutes. Brandon Pace’s 37-yard field goal with 11:36 left in the half made it 10-7 and was his 14th consecutive successful field goal.

Clemson was in great position to at least tie it when C.J. Gaddis stripped the ball from a scrambling Glennon and Gaines Adams recovered for the Tigers on the Tech 25.

Three plays later, however, Proctor never got the handle on the third-and-9 snap and Hokies defensive end Barry Booker jumped on the loose ball to end the threat.

The teams were like mirror images in the first quarter.

Both started with three-and-outs, and then the Tigers drove 77 yards in 11 plays to Davis’ 17th rushing touchdown of the season, a 6-yard burst around the left side.

The Hokies countered by driving 84 yards in 12 plays, highlighted by Glennon’s 2-yard sneak on fourth-and-1 from the Hokies 36, and Ore’s 40-yard burst through the right side to the 6-inch line. Two plays later, Glennon dove it in.