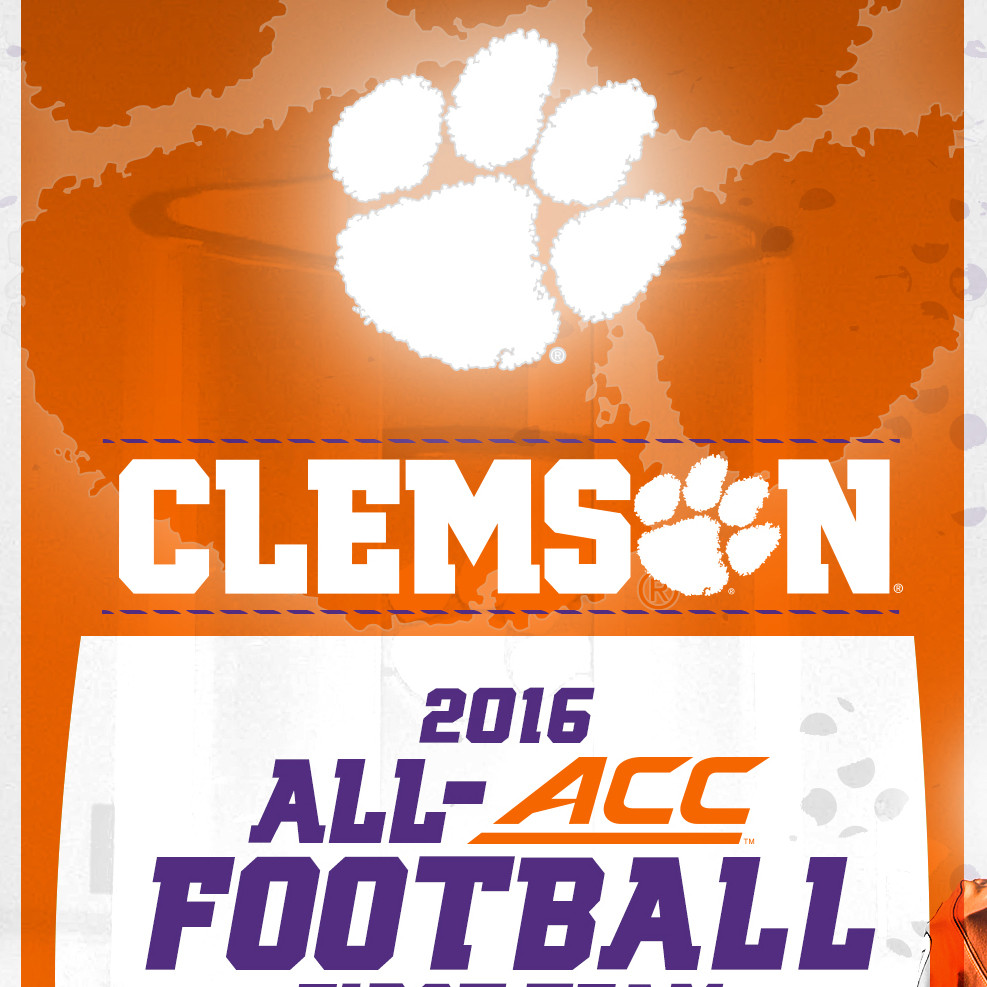 Clemson, S.C.—Nine Clemson players, five on offense and four on defense, were named first-team All-ACC by the Atlantic Coast Sports Media Association on Monday. Sixteen of Clemson’s starting 22 were named to one of the three teams or the honorable mention team.

Eighteen Clemson players were honored on one of the three teams or the honorable mention team. The nine first team selections are the most for the program since 1991 when Clemson also had nine. The record is 10 set by the 1978 team that finished with an 11-1 record and a No. 6 final ranking in both polls.

Mike Williams, who tied a Clemson record for touchdown receptions with three in the win over South Carolina this past Saturday, was a first-team All-ACC receiver. Jordan Leggett was the first-team All-ACC tight end. He needs just 11 receiving yards to break Dwayne Allen’s record of 598 yards by a tight end set in 2011.

The defensive players on the first team included team sack leader Carlos Watkins, leading tackler Ben Boulware at linebacker, and defensive secondary players Cordrea Tankersely and Jadar Johnson. Tankersley leads the team in pass deflections with nine, while Johnson leads the team in interceptions with five. Johnson was the only first-team selection from Clemson this year who was not a returning starter from 2015.

Competition for All-ACC at quarterback and running back was fierce in the ACC this year. Deshaun Watson was the second-team All-ACC quarterback after throwing for 34 touchdowns and 3626 yards during the regular season. He quarterbacked Clemson to a 11-1 record and a bid to this weekend’s ACC Championship game. Gallman was second team running back after racking up 14 touchdowns and 943 rushing yards during the regular season.

Christian Wilkins, a finalist for Nagurski Award as National Defensive Player of the Year, was a second-team All-ACC defensive end, while freshman Dexter Lawrence was second-team defensive tackle.

Artavis Scott was a third-team choice at wide receiver. It Is the third year he has made an All-ACC team. The junior needs just eight receptions to become Clemson’s career leader. Kendall Joseph (LB), Van Smith (SS) and Ray-Ray McCloud (specialist) all were named honorable mention All-ACC.

The 15 first, second or third team All-ACC selections rank as the second most under Dabo Swinney. Last year’s team had 17. The 14 first or second-team selections are the most in school history for one season.