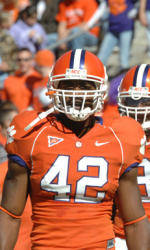 Clemson, SC – Maurice Nelson, the fifth leading tackler on Clemson’s 13th ranked total defense, has decided to forego playing his final season of eligibility and graduate in August. The native of Rembert, SC came to Clemson as a freshman in 2003, when he red-shirted the season. A senior academically, Nelson had another year of eligibility.

“I have enjoyed my college football experience at Clemson, but I am just ready to graduate and move into the business world,” said Nelson. Nelson met with Clemson Head Coach Tommy Bowden earlier this week to discuss his decision.

Nelson had 71 tackles as a starting linebacker in 11 of the 13 games in 2006. He had five tackles for loss, including a pair of sacks. He had a career high 11 tackles at Virginia Tech and had nine stops in the victory over ACC Champion Wake Forest. He also had a sack in that game. Nelson also had seven tackles in the win at Florida State and the home victory against NC State.

“Maurice was one of the players we needed to step up when injuries hit our football team last year,” said Clemson Head Coach Tommy Bowden. “He did an outstanding job for us and represented the program well for the last four years. I am sure he will continue to represent the program in a positive fashion for years to come.”

Nelson will be the second student-athlete from family to graduate from Clemson. His brother, Tommy Bowden from 2002-04. He earned his degree in 2005 and is now an assistant football coach at Crestwood High School in Sumter, SC.