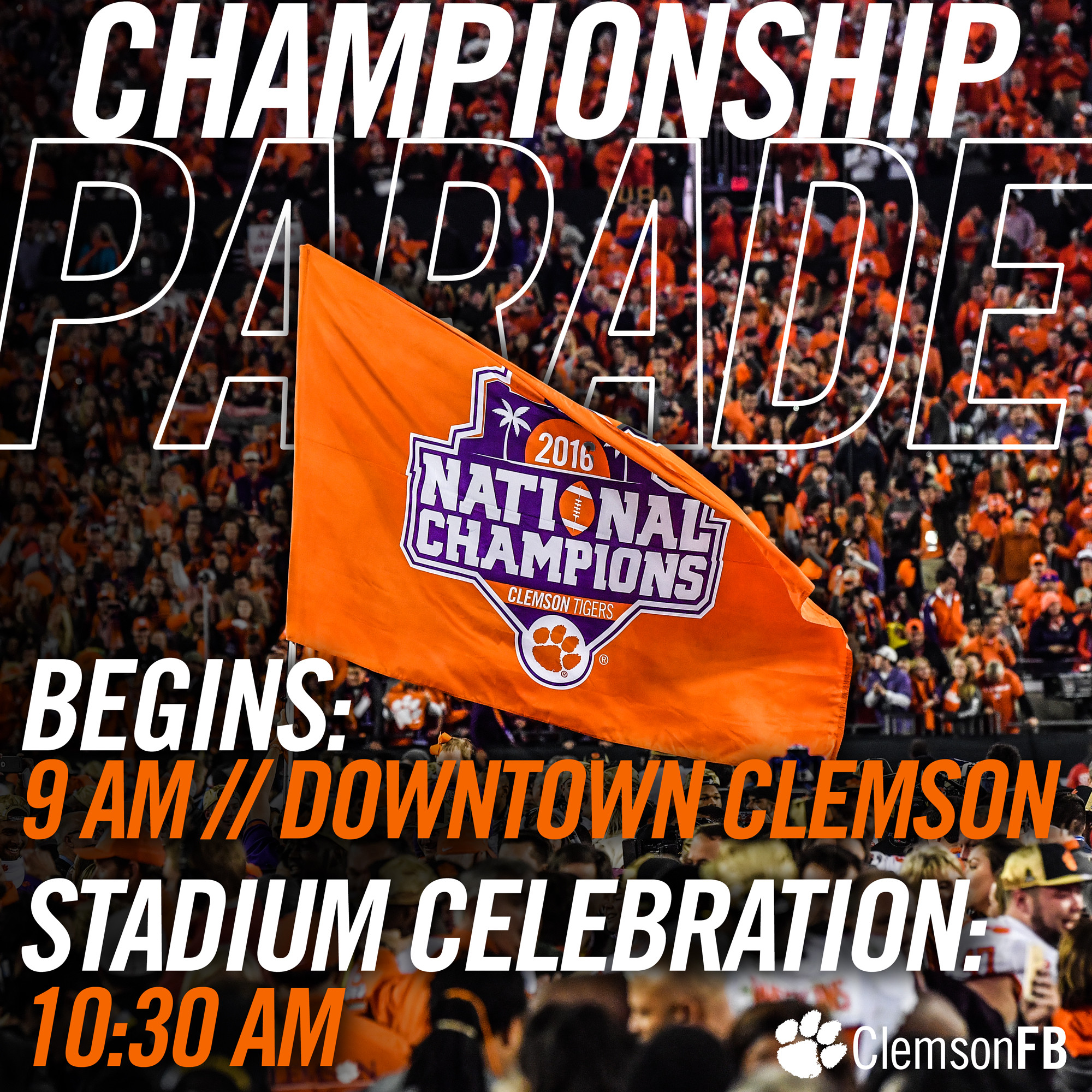 The parade is scheduled to roll at 9 a.m., with the in-stadium celebration scheduled to start around 10:30 a.m. The celebration will include comments from President Clements, Director of Athletics Dan Radakovich, presentation of the AFCA Coaches Trophy and the College Football National Championship Trophy, as well as comments by players and Coach Swinney.

Fans can enter the stadium at 7 a.m., with Gates 1, 5, 9 and 13 open for access to the seating areas. Gate 10, the visiting team tunnel, will also be open for fans and students to stand in the general admission areas on the field (as shown on map).

Clemson’s men’s basketball team plays ACC foe Virginia tomorrow at 12 noon in Littlejohn Coliseum, and the game is sold out.

Clemson University, City of Clemson and Clemson Athletics officials finalized details for Saturday’s celebration of the 2017 College Football Playoff National Championship winning Clemson Tigers. The parade begins at 9 a.m., in downtown Clemson (at the intersection of College Ave. and Keith Street). It proceeds toward Bowman Field, turns onto Hwy. 93 toward the athletics district. It’ll turn on Centennial Blvd. toward Memorial Stadium, traverse Avenue of Champions to Gate 5 (Ave. of Champions and Williamson Road).

Gates at Memorial Stadium open at 7 a.m., and fans can watch the parade from inside the stadium on the video boards. The in-stadium celebration will begin at 10:30 a.m., and fans can enter through gates 1, 5, 9 and 13. The clear-bag policy will be in effect.

Concessions and novelty stands – featuring officially licensed National Championship merchandise – will be open on both concourses.

PARADECollege Avenue from Edgewood to Hwy. 93, as well as the downtown parking garage, will be closed beginning at 4 a.m. Saturday morning. Cars parked there will be towed to clear the parade route.

Available on-campus parking will be first-come, first-served starting at 7 a.m.

C-1 and Kite Hill near Hwy. 76 will also be available for general public parking with limited shuttle service.

Grass football parking lots (Lot 1, Lot 2) are intramural fields and will not be available.