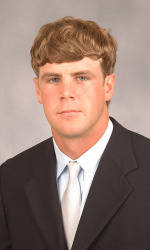 Clemson, SC-Clemson tight ends coach Billy Napier has been ranked among the top 25 college football recruiters in the nation according to Rivals.com. Napier was one of six ACC coaches on the list.

This marks the third straight year one of Clemson’s assistant coaches has been ranked as a top 25 recruiter by Rivals.com. Current Clemson wide receivers coach Dabo Swinney was listed in the top 25 in 2005 and 2006.

Napier, only 28 years old and one of the youngest coaches on the top 25 list by Rivals.com, coached Clemson’s tight ends in his first full season as a Division I assistant. His top performer, Thomas Hunter, was an honorable mention All-ACC tight end and finished the year with 16 catches for 305 yards, a team best 19.1 yard average. His yardage total was the highest by a Clemson tight end since Bennie Cunningham had 312 in 1975, his senior year when he was named a first-team All-American.