Standing 6’4” and weighing 245 pounds as a freshman in high school, football has come naturally to Myles Murphy, and he has the statistics to prove it.

Murphy entered the 2022 season with 94 tackles, 26 tackles for loss, 11 sacks and five caused fumbles in 25 games (16 starts). He stands alongside Clemson greats Gaines Adams, Vic Beasley and Clelin Ferrell as the only Tigers since 2000 to post multiple seasons with at least four sacks and multiple caused fumbles.

Murphy’s love for the game stems from his brother, Maxwell, who attended an NAIA school, Worcester (Mass.) Polytechnic Institute, to play football. Not only was he inspired by his brother’s football career, he also drew inspiration from him academically, as Maxwell was an engineering major.

Murphy initially decided to major in architecture. However, he has since found a passion for his new major, construction science & management. Balancing classes on top of sports can be difficult, but in the past few years at Clemson, Murphy has started to figure things out.

“It can be tough. During my entire freshman year, I was struggling with time management and getting my work done. If you learn how to handle those things, it goes pretty smoothly. Being in the Clemson football program really teaches you time management.”

While Murphy puts a significant amount of focus on his academics, his football career remains on his mind. As he continues with his third and possibly final year with the Tigers, he has new goals on his mind this season.

“My main goal is to be the most disruptive player on the field at all times. With me being the most disruptive person on the field, other things come with that, including beating your one-on-one competition and getting the sacks, tackles for loss and quarterback pressures. If I am not being huge in the box score, I am still affecting the quarterback or the ball carrier in some type of way.”

Murphy’s aggression has shown through his domination on the defensive line. While he is a disruption on the field to the opposing offenses, many describe him as a quiet-natured person. As a result, Murphy is working to become more communicative during games and practices.

“I am stepping into more of a leadership role. I am not the most vocal person, but I have always been the person to lead by example. Having a few conversations, I was told that I do need to step into a more vocal position, because when I talk, people listen.”

Murphy is continuously receiving support from both the coaches and players at Clemson. He has always looked to the people around him to help develop him into the dominant player he is today.

“Clemson has done a lot for me. On the field, Coach (Lemanski) Hall and Coach (Dabo) Swinney have instilled a ‘go-get-it’ mindset. They have taught us to focus on the things that will make us better and to put things that do not make us better on the back end.”

Not only does the Tiger football program rigorously work to develop the team’s football skills, there is also an emphasis on personal development. Murphy specifically detailed that his involvement with P.A.W. Journey has contributed to his personal development and career building.

“P.A.W. Journey is a leadership initiative that teaches football players how to become better leaders, on and off the field. It exposes you to different jobs and internships. I have been able to make connections with two construction companies.”

As Murphy has progressed through his junior season, he has taken the time to appreciate all that Clemson has given him, even the moments that some deem unfavorable.

While the NFL is likely in Murphy’s future, as he is a highly touted 2023 NFL draft prospect, he has several other personal goals he wants to accomplish in his lifetime. Some of his biggest goals in life include building a family and developing his construction career.

“Aside from football and the NFL, I want to become and good father and husband. One thing I have been looking forward to is either owning my own construction company or owning my own subcontracting business.”

Murphy’s drive and focus on football and his academics have set him up for a bright future. 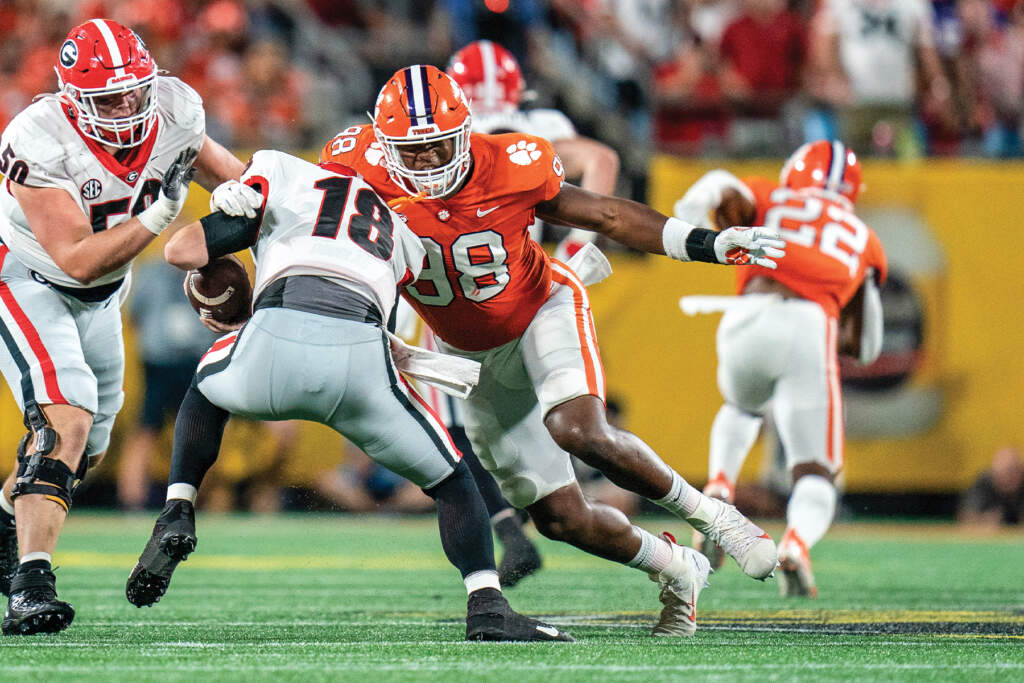