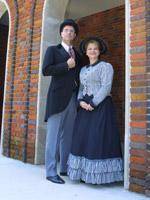 “Heisman,” a new musical production based on the legendary John Heisman’s four years as Clemson’s head football coach, will have its world premier in Tillman Hall on the campus of Clemson University during the 2003 football season. The new musical is co-sponsored by IPTAY and Garland Productions, and celebrates the 100th anniversary of Heisman’s last year as Clemson’s head football coach in 1903. The musical also coincides with the 50th anniversary of the Atlantic Coast Conference.

The production will be staged on three consecutive home football game weekends at Clemson’s Tillman Auditorium from August 28-30 and September 5,6,11-13. The show will feature Clemson students along with local actors, singers, and dancers. The show promises to be a rousing celebration of the Heisman era and Clemson football.

The “Heisman” is a trophy revered by college football players and neighborhood “pee wees” alike. The name is symbolic with the best in college football. But as Mike Garrett (Southern California halfback) said when he won the coveted Heisman Trophy as Player-of-the-Year in 1965, “The award’s wonderful. But who’s Heisman?”

A Southern writer-actor, Garland Atkins has revived interest in John Heisman-the-man in this musical. Atkins plans to take the show to New York in 2004 on the 135th anniversary year of the legendary coach’s birth. In describing the amazing career of Heisman, Atkins cites John Brady’s book, “Heisman – A Symbol of Excellence.”

“While coaching at Clemson in 1902, the wily Heisman outwitted the Georgia Tech fans through a ruse that separated a considerable number of Atlantans from their money. On the day before the game, the Clemson team arrived by train and checked into a hotel. Later in the evening, Georgia Tech supporters were amazed how easily they had seduced the Clemson players to spend the night in the city’s wild goings-on, Heisman’s already well-known training rules not withstanding.

“When the bleary-eyed Clemsonites finally turned in at daybreak, people in the know could hardly wait to bet on the certain outcome of the game. Later in the morning, another train rolled into town, this one with the Clemson Varsity team, who spent the night in safe, little Lulu, GA, a tiny hamlet a few miles outside the wicked city. The ‘players’ who arrived the previous day were ‘scrubs.’ Clemson licked Georgia Tech 73-0.”

Georgia Tech supporters were so furious at the defeat, they hired Heisman. Atkins devotes one scene in the play to the famous Clemson-Guilford game, which ended in a 122-0 Tiger win.

A Heisman Georgia Tech team broke into Ripley’s Believe It Or Not and Guinness Book of Records by winning the most lopsided football game of all time. The year was 1916, the opponent was Cumberland College (once a football power in the South), and the score 222-0. One statistic tells the story best: There were no first downs. None. Cumberland never made one and Georgia Tech scored every time on the first set of downs. At halftime, with his team already ahead 126-0, Heisman told his troops: “Men, we’re in front, but you never know what those Cumberland players have up their sleeves. So in the second half, go out and hit ’em clean and hit ’em hard. Don’t let up.”

“Heisman was a great innovator of the game,” Atkins says. “He was responsible for the center snap, audible signals (“hike”), the hidden-ball trick, the jump shift or Heisman shift (now illegal), the inspiration for the later T-formation, and the first scoreboard that showed downs and yards. Heisman fought to get the forward pass legalized, a step that would open up the game and help prevent so many deaths and game injuries.”

Atkins stresses that his musical production is a family-oriented show. “We want the young players to see how football used to be. Padding was scarce, many players didn’t wear helmets, and play was rough.”

Atkins is a North Carolina journalist, who has written four books, including the biography of Wake Forest legend Horace A. (Bones) McKinney. He also wrote a comedy, “A Hell-of-a-Way to Run a Railroad.”

Heisman left Georgia Tech in 1919 and soon would be involved in another innovation, as Brady describes. “A project was underway in New York City that would eventually involve John Heisman and have a significant impact on all American football – The Downtown Athletic Club. When a search was made to find a man to head up the Athletic programs of the club, Heisman was interviewed and hired. In 1933, mainly at Heisman’s urging, The Touchdown Club of New York was organized and in 1935 another project Heisman supported was inaugurated – The Downtown Athletic Club (DAC) Trophy for the best football player East of the Mississippi. The scope of the award was enlarged to include the best player in the nation.

“On October 3, 1936 John Heisman died in New York after a brief illness. When the DAC Trophy was awarded the second time, two months later on December 10, 1936, it had a new name…The Heisman Memorial Trophy.”

For additional information on the official “Heisman” website, visit www.heisman.homestead.com, which has a printable ticket form. Ticket prices for the two-hour show are $30 for adults, and $20 for students and children (make check payable to Garland Productions and mail to IPTAY/Clemson University; P.O. Box 1529; Clemson, SC 29633). Tickets can also be purchased at the Clemson University Student Union and at Tillman Auditorium (at the door). For information by phone, contact Garland Atkins at (704) 718-1595.