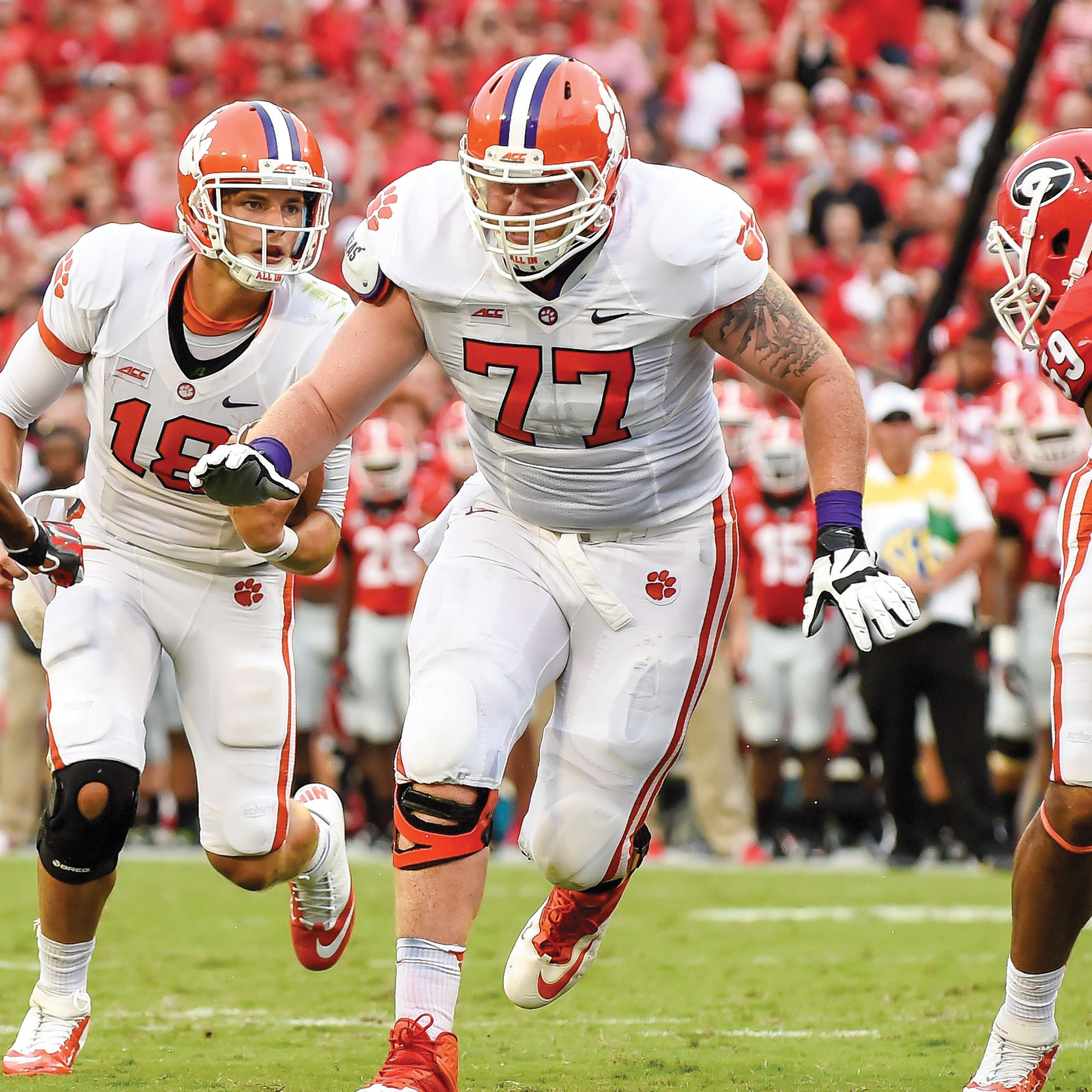 Any athlete will say they hate being on the sideline while the game is going on. Even missing one game can be frustrating. But sticking around while being sidelined for most of your career?

That is a feat of patience that Reid Webster has endured.

“It’s been frustrating at times,” admitted #77. “I don’t think I’ve struggled with it that much. There have been times where I thought maybe I should play more, but you have to wait for your chance. Once it’s there, you have to take that opportunity and run with it.”

As a fifth-year senior and graduate student, he is finally seeing his patience pay off. Now in his final season, he has played both guard positions, where in previous years he had not played much at all, and seen action at every other position on the offensive line in his career.

“Reid is going to have a great senior year and he is a great example to the young offensive linemen,” said Head Coach Dabo Swinney. “On the field, he has worked hard for four years to make his final year special. His versatility is so important for our offensive line.

“Off the field, he has already earned two degrees. I can’t say enough good things about what he has done here.”

However, just because Webster is in his final season, it does not mean he is taking the game too seriously. In fact, his pregame ritual usually involves reading the entirety of the funny pages before the game.

Webster graduated in August with degrees in management and marketing and will play out the rest of the season before taking the next steps in his life. For the time being, he can’t look too far ahead, as he is mostly focused on football at the moment.

He can, however, reflect back on his time here at Clemson. When asked about his fondest memory on the team, Webster responded, “Probably our win against LSU in the Chick-fil-A Bowl. I didn’t get to play a lot in that one, but I was on the field-goal unit.

Webster also has good memories from some other notable victories, “including when we were at Maryland in 2011 and came back from down 17 points at halftime. Of course the Ohio State game from last year in the Orange Bowl was a fun one. Just being in Miami and then beating Ohio State, who hadn’t lost in the regular season in two years.”

Webster is also proud of the new family he has formed in his time at Clemson.

“I have a couple of guys that I’m real close to. My roommate, Sam Cooper, is a guy I’ve lived with for five years. I’ve also built other strong relationships, especially with the other guys on the offensive line.

“We have group texts with all the active guys and we still have others with the guys from two years ago. They can get annoying sometimes when you’re trying to go to sleep and you have 20 people texting you.”

The players are not the only people he has formed close bonds with.

“I’d love to keep in touch with the coaches,” he said. “Especially when I come back to Clemson, it’ll be great to see someone who’s impacted your life.”

“I think it’s great. I wish it would’ve happened four years ago and I could’ve enjoyed it a little longer. You see a lot more guys hanging out here in between class, before practice and after practice rather than just getting out of here.”