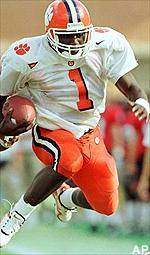 CLEMSON, S.C. — Tommy Bowden’s Clemson Tigers had two practices without full gear on Monday. Tuesday the real fun begins as the team will donn full pads for the first time. Clemson will work at 7:30 AM and 4:00 PM on the practice fields behind the Jervey Athletic Center. The practices are closed to the public.

“The USS Clemson pulls out tomorrow at 7:30 AM,” said Bowden. “I know I am anxious to see them put on the pads. We have had great enthusiasm so far and I expect it will carry over to the first day of pads. They will be motivated for the first couple of days. After that they will be ready to hit someone else.”

Bowden said both practices went well on Monday. The team had a full day of recovery from Friday and Saturday two-a-days, as the squad took part in Fan Appreciation Day on Sunday. Bowden took time to single out some performances on Monday after the second practice.

“Terry Witherspoon has picked up where he left off in the spring from a running standpoint, and he caught the ball well today. If we can get him down to the high 240s (weight) he could help us at tailback this year.” Witherspoon, who received his undergraduate degree from Clemson on Saturday, said he was currently at 263.

Bowden also said that freshman offensive guard Greg Walker was making progress and could also make an impact if he drops a few more pounds. “If Greg Walker gets to between 298 and 305 he could see a lot of playing time. With Theo Mougros missing some time due to injury, Greg has gotten an opportunity. He has shown us something. He is a smart player who picks up the offense.”

Bowden also said that freshmen Ronnie Thomas, Ryan Hemby and John Leake have done well so far. “Leake looks like he will help us on all the special teams. Thomas played at the same high school as Willie Simmons, so I know he comes from a good program. Hemby has played well also.”

Bowden also said that Woodrow Dantzler continues to be the front runner at quarterback. “Woody still has some separation between himself and Willie, but Simmons and Schell have had good fall camps so far.”