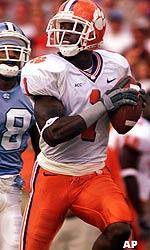 Clemson held its first two-a-day practice schedule of the preseason on Monday. After spending Sunday with the Clemson faithful during Fan Appreciation Day, the Tigers worked on the practice fields behind the Jervey Athletic Center for a combined five hours on Monday, a 2:40 session in the morning and for 2:20 in the afternoon.

NCAA rules limit teams on the number of two-a-days they can have in the preseason. In fact, Clemson will have just four such days this year. New rules state that a team can not hold two-a-day workouts on consecutive days.

The Tigers will hold a scrimmage on Tuesday afternoon at Death Valley that will be closed to the public and the media. They will be back to two-a-days on Wednesday in the morning and afternoon.

“We had a good day of practice overall,” said Head Coach Tommy Bowden. “In the morning we scrimmaged some in full pads at the goal line and it was even, the offense scored eight times and the defensive held eight times.

The Tigers will scrimmage on Tuesday, the first major scrimmage of the preseason. “We have a lot of positions open on this team, some good battles. I will be looking for some players to step up and take over some of those positions that are close battles.”

One of the players that has stood out has been wide receiver Airese Currie, a junior from Columbia. “Airese has taken over a starting spot in our two-receiver set from Derrick Hamilton. He has been our most consistent player in the preseason among the receivers. He makes big plays. We are looking for someone to do it consistently like Rod Gardner did.”

Bowden announced a pair of position changes among his freshmen. Tramaine Billie was moved from running back to the secondary, while Chris McDuffie moved from offensive tackle to defensive tackle.

Billie is a first-year freshman from Dreher High School in Columbia who has been a standout among the freshmen so far. He score 19 touchdowns on offense and rushed for over 2000 yards as a senior in high school. He also had 52 tackles on defense. He was a finalist for Mr. Football in the state.

McDuffie, who missed a practice last week due to a pulled hamstring, is a freshman from Danville, VA and George Washington High. He was named the AAA Defensive Player of the year and was the MVP of the Virginia Shrine Bowl.