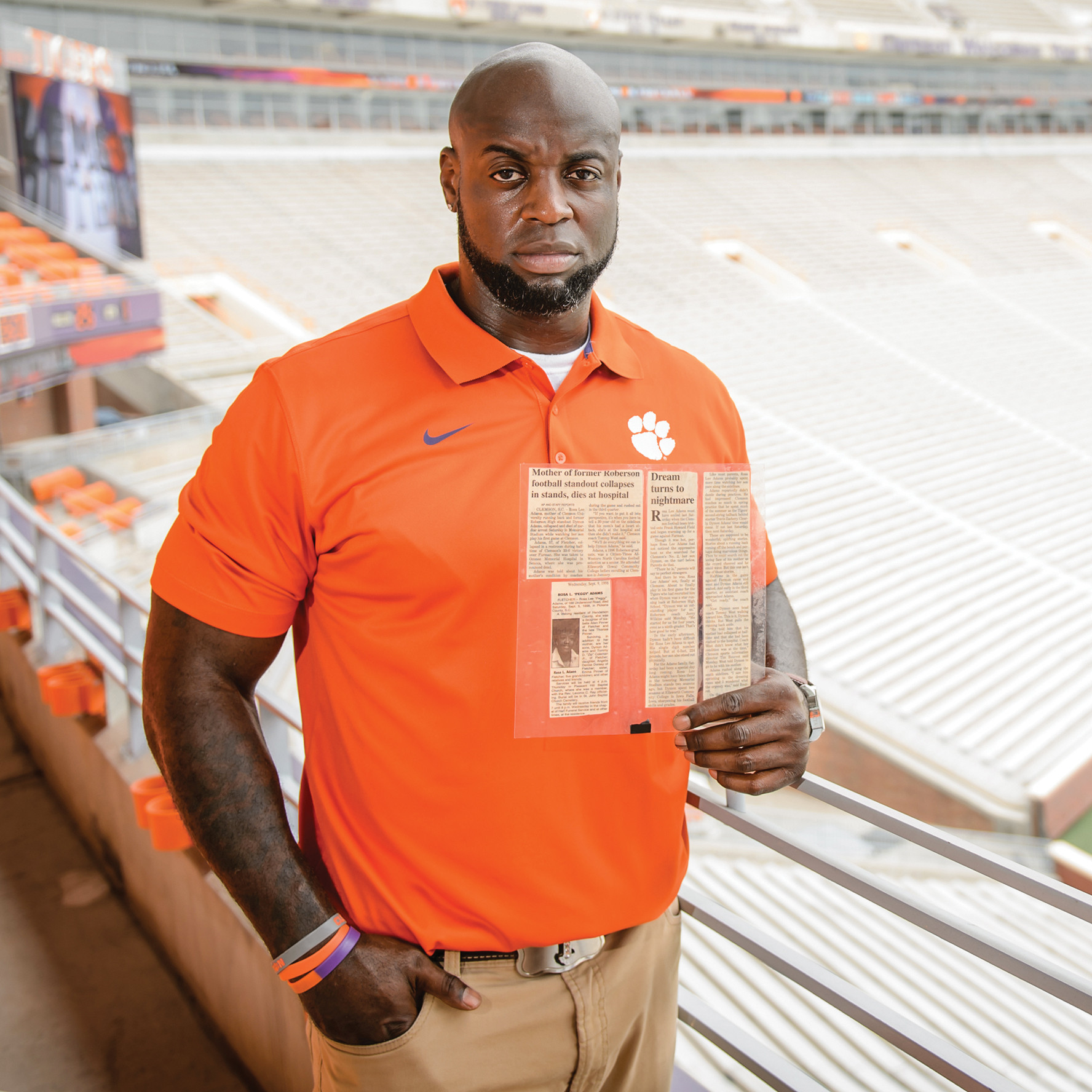 This date on the calendar will forever hold memories of football games played, friends made and tailgates attended. But as the years go by, most will forget the final score of the game, forget exactly how they met that one special friend and forget what kind of food they ate before heading to see the Tigers play.

What they will not forget is how exactly they felt on that day.

For one Tiger, student assistant coach Dymon Adams, September 5 holds the memory of tragedy, strength and eventually, triumph. He is no stranger to the Clemson family.

“I grew up with Clemson since I was a little kid,” he smiled. “I believed I was destined to come here.”

After verbally committing to Clemson in high school, Adams enrolled in junior college for a year and a half after just missing the mark on his SAT.

“I had a lot of growing up to do,” admitted Adams. “I felt obligated to come back because Clemson stuck with me (through junior college).”

When Adams made it back to Clemson in the spring of 1998, his expectations were high.

“I had a great spring, a really great spring. There were many high expectations. I was going to be a really big part of the team.”

Adams was right. On April 4, 1998, he had 141 yards on 26 carries in the Spring Game. He outrushed Travis Zachery and Woodrow Dantzler that day. It is still the most rushing yards by a Tiger in a Spring Game.

When the Tigers ran down the Hill on Sept. 5, 1998 before Clemson played Furman, Adams’ mother, Rosa, was in the stands to see her son play.

“My mom had dedicated a lot of time, energy and work to see me get back to playing shape,” recalled Adams. “She knew how badly I wanted it…it was something we wanted together.

“My sister says it was the happiest she has ever seen my mom, the day they came here. I was happy because I had been in Iowa playing (at a junior college) and I wanted her to see me play.”

The game began as any other in Memorial Stadium and Adams was waiting for his chance to head into the game.

“I was going to get my chance towards the middle or the end of the second quarter and finish out the rest of the game,” remembered Adams. “Right before I went on the field, one coach was giving me a play in this ear and coach Tommy West grabbed my arm, and that’s when they told me.”

What he heard next was devastating. Adams’ mother had collapsed in the stands, suffered cardiac arrest and been rushed to the Oconee Memorial Hospital in Seneca.

“Coach West didn’t really give me a lot of information,” said Adams. “All he said was my mom had collapsed in the stands and I needed to get to the hospital as soon as possible. When he told me that, I knew something was wrong and I dropped to the ground. By the time I got to the hospital, she had already passed.”

Continuing the season with the Tigers, Adams thought he could handle the loss, but he struggled internally.

“It ruined me. I wasn’t mentally there. I almost walked away from the game totally. I didn’t know if it was for me anymore.”

Adams went on to finish the 1998 season with the Tigers and then transferred to Northern Iowa to finish his college career. After that, Adams released some of his anger towards the game with a few years of arena football, where he had a few MVP seasons.

When the dream of playing professional football ran out, Adams turned his focus to his daughter, Ciara.

“I understood that my daughter was my first priority…it was no longer about me,” stated Adams. “I worked my tail off in a ton of sales positions all over the country. I’ve worked in San Diego, Denver, Dallas, Florida, Los Angeles and Chicago for a little while. I was all over the place.”

By the time Ciara had grown up and decided that she too wanted to be a Clemson Tiger, Adams owned two collection companies. However, something was missing.

“There was a fire inside of me. Ciara was here at Clemson, and for the first time I returned to the stadium. I came back to visit her at the Clemson vs. South Carolina game in 2014 and I loved it.”

Adams also has a strong support system in great family friends, the Pieters.

“The Pieters family really pushed me to open up a door,” explained Adams. “They knew what I wanted to do. They told me, ‘Hey, if you’re going down there and see that game, you need to try and talk to the coach. We know how bad you want to coach football. We know how bad you want to get involved. It has been eating you up.’ I had been trying to fill a void that I didn’t realize had been there all along.”

After enjoying the Clemson experience on gameday, Adams set up a meeting with head coach Dabo Swinney to talk about how he could get involved with football again.

“I went into his office and broke down in tears. I told him my story and he gave me an opportunity. I didn’t think that would be the outcome. I just went to him looking for advice. It is crazy how I ended up here.”

Returning to the grind at Clemson has been emotionally tough, but it has been a rewarding opportunity for Adams.

“It is awesome. Emotionally, I came in the stadium a couple times and broke down, but every day has been a blessing here.

“This is something I never thought was realistic to happen in my life. It is long and tiring, but I love it. When you’re doing what you love, it doesn’t feel like a job.”

As a student assistant coach, Adams has the opportunity to return to school and receive his degree while working with the team. Adams is pursing a sports communication degree, something he is confident his mother would have wanted him to earn.

Adams’ daughter, Ciara, is also a student at Clemson and said her choice to enroll was an easy one.

“I had to choose what I felt most at home with,” said Ciara. “I have a lot of family history at Clemson and it was the happiest campus.”

With the Tigers playing their first game of the 2015 season today in Memorial Stadium, on the 17th anniversary of his mother’s passing, Adams is looking towards today’s contest with optimism.

“To be honest, I am looking forward to this day,” said Adams. “This is a new beginning where I put some old demons to the back. I’m sure I will be emotional, but I am anticipating it.”