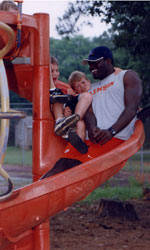 He looks on as Tucker, one of the eight preschoolers he watches at the YMCA Foothills Area Family summer camp, bolts left with a soccer ball. Meanwhile, Gabe climbs the Velcro straps of a protective pole cover while Brooke yells into a big floor fan. Two others need a drink. And all at some point want Dantzler’s attention.

“Let’s go!” Dantzler shouts, “We’re going to play.” The chaos ends. The children line up. Dantzler is in control again.

“I love working with them,” he says of his summer passion. “They are special people.”

Dantzler is pretty special, too, popping up on early Heisman Trophy lists as one to watch this year, along with Northwestern tailback Damien Anderson, Miami quarterback Ken Dorsey and Indiana quarterback Antwaan Randle El.

It was an injured left ankle — hurt against North Carolina in game eight last season — that kept Dantzler from becoming the first college player to throw for 2,000 yards and run for 1,000 yards.

“Shoot, he would have done it easy,” Clemson coach Tommy Bowden says.

Even though the injury limited Dantzler in the last four games of Clemson’s 9-3 season, he finished with 1,871 yards passing and 1,028 yards.

As far as the Heisman hype, “it’s an honor to be mentioned with those candidates as some of the best in college football,” Dantzler says. “It’s what you work toward when you play this game.”

No one knew what to do with Dantzler when he signed with Clemson four years ago. He had arm strength, but was not a traditional pocket passer. He could find holes running, but was too dangerous a thrower to make a full-time running back. How should he be used?

“I guess that was the question everybody has always had of me,” Dantzler says. “It seems like I have to prove myself every where I go.”

Dantzler always seems to do it.

Dantzler sparked Clemson to an 8-0 start last season. He had touchdown runs of 75 and 45 yards against Virginia while running for 166 yards and passing for 157 against Wake Forest.

The offense of Bowden and former offensive coordinator Rich Rodriguez gave Dantzler the freedom to dazzle with his arm or legs. Former Virginia coach George Welsh said Dantzler ran a revamped version of the single wing only no one could stop it.

Dantzler routinely slipped past two and three defenders, cutting back or circling around for big gains.

His most memorable play came in Clemson’s final victory, launching a 50-yard throw to receiver Rod Gardner setting up a game-winning, last-minute field goal in a 16-14 win over archrival South Carolina.

“He is always a threat to do something like that,” says Clemson offensive coordinator Brad Scott, who tried to recruit Dantzler when he was head coach of the Gamecocks. “You can do so many things with him.”

Talking about the Heisman is not one of them, though.

“I’m treating it like, ‘I don’t care”‘ Dantzler says, standing among the preschoolers with Clemson’s Death Valley visible across Lake Hartwell. “My goal is for us to win.”

That’s just Dantzler’s way, Scott says. “You never hear him talk about the Heisman or awards. Heck, you might come in and see him watching cartoons.”

That’s easy to understand watching Dantzler work with children. As soccer goalie, he urges each to kick it past him, then clumsily allows the ball through as the munchkins run back with big smiles.

That’s not what the Clemson staff saw from Dantzler as a prep star at Orangeburg-Wilkinson, said former Tiger coach Tommy West. Dantzler had about 400 yards of offense against Gaffney during one memorable film, West said.

“You knew he could run, but there aren’t that many running backs with an arm like that,” said West, now Memphis head coach.

West said he wasn’t convinced at first that his Clemson attack wanted a speedy, two-faceted quarterback and thought Dantzler would be next in the line of great Tiger runners. “But he could throw darts, he was accurate and strong,” he said. “We had to have him at quarterback. That’s why he’s getting so much attention for the Heisman this year.”

Any Heisman promotion Dantzler gets this year will be like himself — low key. “I’ve always come from a humble family,” Dantzler said.

Clemson assistant athletic director Tim Bourret says the school will rework last year’s “No Knocks on Woody” campaign for a summer mailing for a modest $5,000. The school’s athletic Web site will feature a Dantzler day planner — entitled “A Man With A Plan” — highlighting landmark days or performances.

Those performances, not a publicity campaign, will speak loudest in the Heisman race.

“Woody will take care of much of this on his own,” Bourret said.

“I guess I was a little skeptical about whether I could play on this level,” he says. “I know that sounds hard to believe. I still feel the pressure of whether I can do the job. We’ll see this year.”

Copyright 2000 Associated Press. All rights reserved. This material may not be published, broadcast, rewritten, or redistributed.