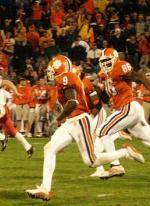 Clemson sophomore cornerback Justin Miller has been named as one of the preseason candidates for the 2003 Jim Thorpe Award. The Thorpe Award, which is named after one of the best all-around athletes in history, is presented annually to the nation’s best defensive back.

Miller, who led the ACC and ranked fifth in the nation with eight interceptions during his freshman season, is projected as one of the nation’s best defensive backs. The native of Kentucky finished last season with 61 tackles, nine passes broken up, and two fumbles caused.

The only true freshman to play for Clemson in 2002, Miller excelled in the return game, taking his first kickoff all the way back for a touchdown against NC State. He led the ACC with a Clemson all-time record 35.1 yards per return. Earlier this summer he was named a preseason candidate for the Bronko Nagurski Award, which is given to the top defensive player in the nation.

The Thorpe “watch list” will be narrowed to 10 semifinalists on November 3 and then to three finalists the Monday before Thanksgiving. The finalists will gather at Disney World for the College Football Awards Show on December 11 where the winner will be announced on ESPN.