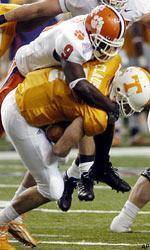 Clemson sophomore cornerback Justin Miller has been named to the All-Bowl team by Sports Illustrated magazine. The team was announced in the magazine’s January 12, 2004 issue. Miller is the second Clemson player to be named to an All-Bowl team. Chad Jasmin was named to ESPN/com’s All-Bowl team last week.

Miller had eight tackles and three passes broken up from his starting cornerback position in Clemson’s 27-14 victory over Tennessee in the Chick-fil-A Peach Bowl. One of the tackles was a seven-yard sack, the first sack of his career. One of the pass deflections took place in the end zone, preventing a Tennessee score.

Miller ended the season with 54 tackles, sixth on the team. Forty-five of the tackles were first hits. He led the Tigers in passes defensed with 15, 13 pass deflections and two interceptions. Miller also ranked among the nation leaders in kickoff return average with a 24.5 figure and averaged 9.1 on punt returns, including a 63-yard return for a score against Duke.

Joining Miller in the secondary on the Sports Illustrated All-Bowl team were Will Poole of Southern Cal, T.J. Stancil of Boston College and Dave Revill of Utah. Miller was one of five sophomores chosen to the team. The others were Kyle Basler of Washington State (punter), Garrett McIntyre of Fresno State (defensive tackle), A.J. Hawk of Ohio State (linebacker), and P.J. Daniels of Georgia Tech (running back).