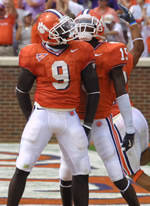 OFFENSIVE BACK Virginia quarterback Marques Hagans completed 11 of 12 passes (91.7 percent) for 202 yards and a touchdown as the 12th-ranked Cavaliers improved their record to 4-0 with a 31-10 win over Syracuse Saturday. In addition, the 5-10, 212-pound Hampton, Va., sophomore ran for a career-high 81 yards and two touchdowns on only six carries. Hagans’ 283 yards of total offense were a career high and he became the first Virginia QB to rush for two TDs since Aaron Brooks did so against San Jose State in 1998.

OFFENSIVE LINE Maryland tight end Vernon Davis turned in a career-best performance in a 55-21 win at Duke Saturday. The 6-3, 240-pound sophomore out of Washington, D.C., had four catches for 101 yards and three touchdowns as the Terps won for the third time in four outings. Davis’ three touchdown receptions tied a school single-game record and were a first by a player in Ralph Friedgen’s four-year tenure at Maryland.

DEFENSIVE LINE NC State defensive end Manny Lawson was tabbed as the Walter Camp Foundation National Defensive Player of the Week after leading the Wolfpack defense with a standout performance in Saturday’s 17-16 win at Virginia Tech. The 6-5, 220-pound Goldsboro, N.C., junior, finished with five unassisted tackles and one assisted hit and recorded three quarterback sacks for losses totaling 27 yards. NC State sacked Virginia Tech quarterback Bryan Randall 10 times, the most sacks by the Wolfpack since a 10-sack outing in a 41-0 rout of Southern Methodist in 2000.

DEFENSIVE BACK Florida State cornerback Leroy Smith keyed a Seminole defensive effort that limited visiting Clemson to only 11 first downs and 173 yards of total offense in a 41-22 victory Saturday. The 5-10, 190-pound senior from Quincy, Fla., turned in one of the big plays of the game when he returned a second-quarter interception 41 yards for a score giving Florida State a 17-7 lead. Smith also had two tackles and one quarterback knockdown.

SPECIAL TEAMS Clemson junior Justin Miller set an NCAA single-game record with 282 kickoff return yards on six returns in Clemson’s game at Florida State Saturday. The 5-11, 200-pound junior from Owensboro, Ky., broke the existing NCAA record by 34 yards. Two of Miller’s returns went for touchdowns, one a 97 yarder and one an 86-yarder. Miller became just the 10th different person in NCAA history, the first in ACC history, to return two kickoffs for touchdowns in the same game.

ROOKIE Miami true freshman Anthony Reddick blocked a punt that was recovered in the end zone for one touchdown and forced a fumble that was recovered and returned 52 yards for another score in last Thursday’s 38-13 win over Houston. In addition, the 6-1, 190-pound defensive back out of Ft. Lauderdale, Fla., played extensively because of Houston’s four-wide receiver offense and also made five tackles, including two solo efforts.