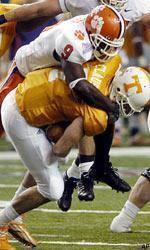 Clemson cornerback Justin Miller has been named a semifinalist for the 2004 Jim Thorpe Award. The award is given to the top defensive back in the nation each year. Miller was one of 12 semifinalist announced on Tuesday. The three finalists will be named on November 22 and the winner will be announced December 9.

Miller is the third Clemson player to reach the national semifinals of the Thorpe Award selection process. Antwan Edwards reached the final 10 in 1998 and Robert Carswell reached the final 12 in 2000. Miller is the first Clemson player to reach the semifinals of any position award since 2001 when Kyle Young was one of five finalists for the Rimington Award and Woody Dantzler was named one of 12 semifinalists for the O’Brien Award.

Miller has been one of the top all-around players in the nation this year. He has 10 passes defensed on seven passes broken up and three interceptions. He has contributed 47 tackles, including 40 first hits to a Clemson defense that ranks 14th in the nation in pass efficiency defense. He now has 13 career interceptions to rank third in Clemson history in that category.