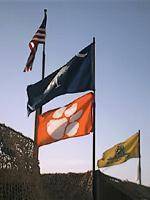 10:30 am – 30 minute Tiger Band concert in the amphitheater located one block from Military Heritage Plaza

10:45 am – Current military personnel and veterans from all wars and their families begin to line-up in Cox Plaza (located next to Military Heritage Plaza) to march to Memorial Stadium

A special introduction will feature former Clemson students, current students, faculty or staff members who are currently serving in Iraq, Afghanistan, or Bosnia/Kosovo.

Veterans will enter the field from the West Endzone

Family members (wearing yellow ribbons) of military personnel (11) from the State of Maryland and South Carolina who have made the ultimate sacrifice while serving their country in Iraq, Afghanistan, or Bosnia/Kosovo will enter the field from the Clemson sideline. Families will be escorted by Lieutenant General Anthony Jones, Deputy Commander of Tradoc and Lieutenant General Walter Buchanan, Commander of the 9th Air Force at Shaw Air Base

The laying of a wreath at Howard’s Rock by the family of Captain Kimberly Hampton (Easley, SC). Family will be escorted by Tiger Platoon.

“Taps” by Tiger Band and the playing of the five service hymns as the colors are being presented by the five military color guards.