Perry, who played for the Tigers from 1984-87, is the only player I have seen who was thrown out of a practice…because he was too good.

It was a spring practice leading up to the 1987 season, his senior year. Danny Ford was putting his team through a scrimmage in Memorial Stadium and I was in the press box keeping stats.

Perry was noted for having a sixth sense about the opposing team’s snap count. He was beating the opposing offensive tackle on virtually every play and registered five tackles for loss within the first 20 plays of the scrimmage.

After the fifth tackle for loss, Ford blew his whistle and came to the middle of the offensive and defensive players and told Perry to leave the stadium.

“Michael Dean, you are too good,” said Ford. “Go in and shower. We can’t get anything done on offense as long as you are out here.”

With that announcement, every player on the field and on the sidelines applauded as Perry trotted into the locker room.

Perry set many records and distinguished himself both on and off the field as a college and professional standout. That is why he was honored in January at the team’s postseason banquet with the Brian Dawkins Lifetime Achievement Award.

Since 2013, Dabo Swinney has presented the award to a former Tiger who has consistently demonstrated the qualities of leadership, community service and other high qualities that are consistent with excellence since graduating from the Clemson program.

A recipient must be out of school at least 10 years. Dawkins, who played 16 seasons in the NFL, was named to nine Pro Bowls and was a finalist for many public service awards, was the first recipient.

“This is a great honor,” said Perry in accepting the award at the banquet that celebrated Clemson’s 14-1 season and No. 2 national ranking. “It is an honor to receive an award named after Brian Dawkins and everything he represents. It is also an honor to receive this award from this program. I take great pride in this program and this university.” 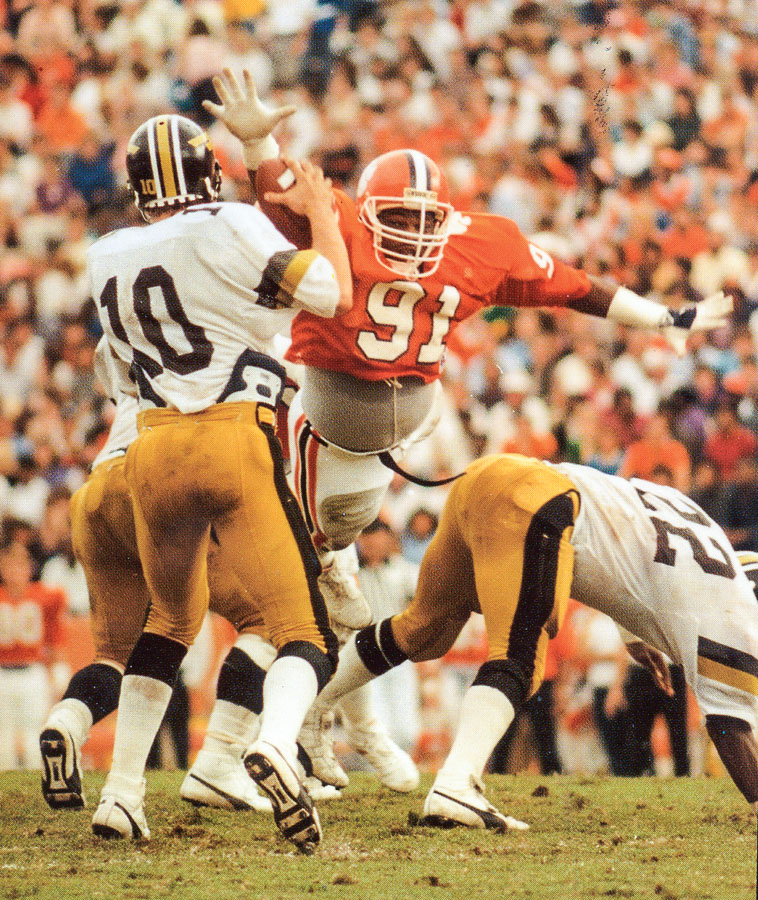 Perry took great pride in playing for Clemson as well. When he was a professional, I asked him about what it was like running down the Hill for a quote in the media guide. He delivered one of the best quotes about the experience.

“Howard’s Rock has strange powers. When you rub it and run down the Hill, your adrenaline flows. It is the most emotional experience I have ever had.”

During his senior year, he helped the Tigers to a second straight ACC championship and a 10-2 record. He had 24 tackles for loss and 10 sacks from his defensive tackle position, and he was a finalist for the Outland Trophy, given to the top lineman in the nation.

Perry was also named 1987 ACC Player-of-the-Year, one of just three Clemson defensive players to win the award. He was named team MVP on defense as well.

The native of Aiken, S.C. played 10 seasons in the NFL and finished with 61 career sacks. He was named to the Pro Bowl six times (1989-91,93,94,96) during his NFL career, second among former Tigers, trailing only Dawkins.

At the end of his career, Perry was named to the Tigers’ centennial team in 2000 and was inducted into the Clemson Hall of Fame the same year. He was also named to the 1990s All-Decade team by NFL Pro Football Reference.

Perry and his wife live in Charlotte, N.C. and operate A1 Transportation Company, which specializes in wheelchair transportation.