The selection committee for the Brian Dawkins Lifetime Achievement Award could not have made a selection that would be more special to Brian Dawkins. This year’s recipient is former Tiger Michael Allen, who has gone on to success as an architect and through his community involvement in the upstate of South Carolina.

The relationship between Dawkins and Allen goes back to Allen’s recruiting visit in 1995.

“I didn’t host a lot of recruits because I was already married,” said Dawkins, who was a senior when Allen was a freshman. “Michael was mature beyond his years, and instead of going out, he came to our apartment and my wife cooked us dinner.”

Dawkins could tell from that visit that Allen was different. How many incoming freshman scholarship student-athletes want to major in architecture? The list is small. The only other scholarship student-athlete who comes my mind among football and basketball players is former Clemson All-ACC basketball guard Cliff Hammonds, who was inducted into the Clemson Hall of Fame last year.

Allen, who was a star high school player from Conway, S.C., was impressed with Clemson and certainly impressed with Dawkins, who went on to be an All-American in 1995, and of course, he became Clemson’s greatest NFL player. The nine-time Pro Bowl selection was inducted into the Pro Football Hall of Fame in 2018, the first former Tiger to be enshrined in Canton, Ohio.

Allen was one of the most versatile football players on Tommy West’s teams between 1995 and 1998. The four-year letterman was a solid contributor to three bowl teams. He started his career as a running back as a freshman, then he played on defense during his final three years in Tigertown.

An off-and-on starter, he had a 50-yard interception return in Clemson’s season-ending victory over South Carolina in 1998, and he also had a career-high 10 tackles as a starter against NC State that year.

Allen was a two-time recipient of an ACC community service award and was honored as a Peach Bowl Scholar-Athlete. He was a founding member of the Clemson LIFE Line Community service program at Clemson. 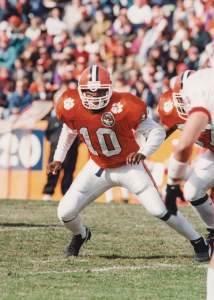 After a professional career that included a stint in the Arena Football League, Allen followed his passion to a career in architecture.

“I used to talk with Brian often when I was trying to make it in professional football, and he gave me great advice along the way,” said Allen. “When it was time to give up my football dreams, he encouraged me to use my architecture degree.

Dawkins’ encouragement was an inspiration to do great things.

For the last 15 years, Allen has had a successful career in the industry, including work with McMillan, Pazdan, Smith Architecture in Greenville, where his area of emphasis has been the design of athletic facilities. Recently, he was the project manager for the design of Coastal Carolina’s baseball stadium in Allen’s hometown.

Recently, Allen was named one of the “Best & Brightest” by Greenville Magazine and has served on boards and advisory committees for United Way of Greenville, Upstate Forever, Greenville Tech College Foundation and the City of Greenville Planning Commission.

Allen founded his own non-profit organization called LeadRs, a reading and leadership development program for young African-American men. He was recently named to the Clemson Board of Visitors and is the current chairman of the Leadership South Carolina Board.

You can see that Allen is an outstanding selection for the Brian Dawkins Lifetime Achievement Award, as he fits the bill for his success in architecture and his contributions to the community.

While it is an honor that means something to Dawkins, it also means a lot to Allen.

“This is a great honor,” said Allen when he received the award at the annual Clemson football team banquet in January, “It is especially meaningful to me to receive an award with Brian Dawkins’ name on it.”