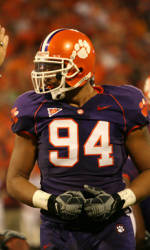 Merling Taken in Second Round of NFL Draft

Clemson, SC – Clemson defensive end Phillip Merling was the first selection of the second round of the NFL draft Saturday evening by the Miami Dolphins. Merling, a defensive end each of the last three years, left Clemson after his junior year to enter the draft.

Merling finished fifth on the Clemson team, first among defensive linemen this past season with 78 tackles. He had 17 tackles for loss and seven sacks, both team bests for Clemson’s top 25 team that won nine games. Merling started every game this past season and played 588 snaps.

Merling was an honorable mention All-American according to Pro Football Weekly and was an honorable mention All-ACC selection. He was named ACC Defensive Lineman of the Week three times, more than any other ACC player, including Chris Long of Virginia, the number two selection of the 2008 NFL draft. It marked the first time since 2001 that any Clemson player was named ACC Player of the Week three times in the same year.

Merling ranked fifth in the ACC in tackles for loss and was 10th in sacks this past season. The native of St. Mathews, SC was a major reason Clemson ranked ninth in the nation in total defense and 10th in scoring defense. The Tigers ranked in the top 25 in all four major defensive categories all three years he played at Clemson, the only time in school history the Tiger defense has done that three consecutive years.

Chances are good that Merling will make the Dolphins when looking at Clemson’s draft history. Every Clemson player who was been drafted within the top 50 selections of the draft since 1964 has gone on to play in the NFL. That is a streak of 28 consecutive top 50 picks from the Clemson program.

Clemson has now had a defensive player drafted within the first 32 players of the NFL draft three consecutive years. Clemson, Tennessee, LSU, Miami (FL) and Ohio State are the only schools in the nation to have a player taken within the first 32 picks of the NFL draft each of the last three years. Tennessee, Miami and Clemson are the only schools with a defensive player taken within the top 32 picks each of the last three seasons.

Merling is the first Clemson player drafted by the Dolphins since the 1998 draft when Jim Bundren and Lorenzo Bromell were both taken by that franchise. Bromell was a fouth-round pick and Bundren was a seventh round selection. The last Clemson player to play for the Dolphins was Keith Adams, who was a linebacker for that team in 2006.