Here are some of my favorite facts, figures and stories about the facility, commonly known as “Death Valley.”

Frank Howard supervised the sodding of the turf in Memorial Stadium in the summer of 1942. The workers were not progressing at a rate that satisfied Howard, so he gave them some incentive.

“About 40 people (including Howard) laid the sod on the field,” said Howard years later. “After three weeks, on July 15, we had only gotten halfway through. So I told them I would give them three weeks pay for however it long it took to finish. I also told them we would have 50 gallons of ice cream brought to the stadium when we finished.

“After that, it took them just three days to do the rest of the field. Then we sat down in the middle of the field and ate up all that ice cream.”

After the facility was finished, a resolution was unanimously adopted to name it Memorial Stadium in honor of the Clemson men who had made the supreme sacrifice in serving their country. Obviously, the stadium was built during World War II.

Death Valley got its name from Presbyterian Head Coach Lonnie McMillan. In 1932, he went to the 1932 Olympics in Los Angeles and stopped by Death Valley, Calif. He experienced the heat first-hand. In 1945, after a 76-0 Tiger victory over his Blue Hose, he referred to playing against Clemson was like playing in Death Valley because it was so hot and the configuration of the stadium.

In the preseason of 1946, McMillan again referred to it as “Death Valley.” Howard liked the moniker and started referring to his own stadium as such.

One of the strangest facts about Memorial Stadium centers around Wake Forest Head Coach Peahead Walker. To this day, Walker has the most wins without a loss (4-0) by an opposing head coach at Death Valley. All four wins were against Clemson’s legendary coach.

What makes this unusual is that Howard and Walker were great friends and loved to play practical jokes on one another. Prior to a game in the 1940s, Howard had some Clemson police officers meet the Wake Forest team bus when it got to the stadium and have Walker arrested. They told him he resembled a fugitive who had escaped from a local jail. They even tied him to a tree near the visiting locker room.

The most unusual weather for a game in Death Valley took place during the 1963 game against Georgia. A storm hit the area at 2:50 p.m. that dropped the temperature from 84 to 57 in a matter of minutes. An inch of hail covered the field and the game was delayed 20 minutes. Clemson blocked two field goals in the second half and the rivals tied 7-7.

One of the most critical Tiger victories in Memorial Stadium took place on Sept. 19, 1981, the 39-year anniversary of the opening of the stadium, when Clemson defeated Georgia 13-3. The Bulldogs, led by Herschel Walker and Vince Dooley, were defending national champions and Clemson was unranked entering the game. But a fierce Clemson defense forced a record nine turnovers and held Walker out of the endzone, leading the Tigers to the victory. Clemson went on to win the national championship that season.

The largest crowd in Memorial Stadium history took place on Oct. 23, 1999, when Clemson faced Florida State in the first Bowden Bowl. It was the first meeting of father (Bobby) and son (Tommy) head coaches in college football history. The attendance was 86,092. Florida State won the game 17-14, the closest game and fewest points the Seminoles scored during their 1999 national championship season.

Dabo Swinney has an amazing 87-7 record in Memorial Stadium, a 55-1 record in the last 56 games and 36 wins in a row, the longest active home winning streak in the nation. 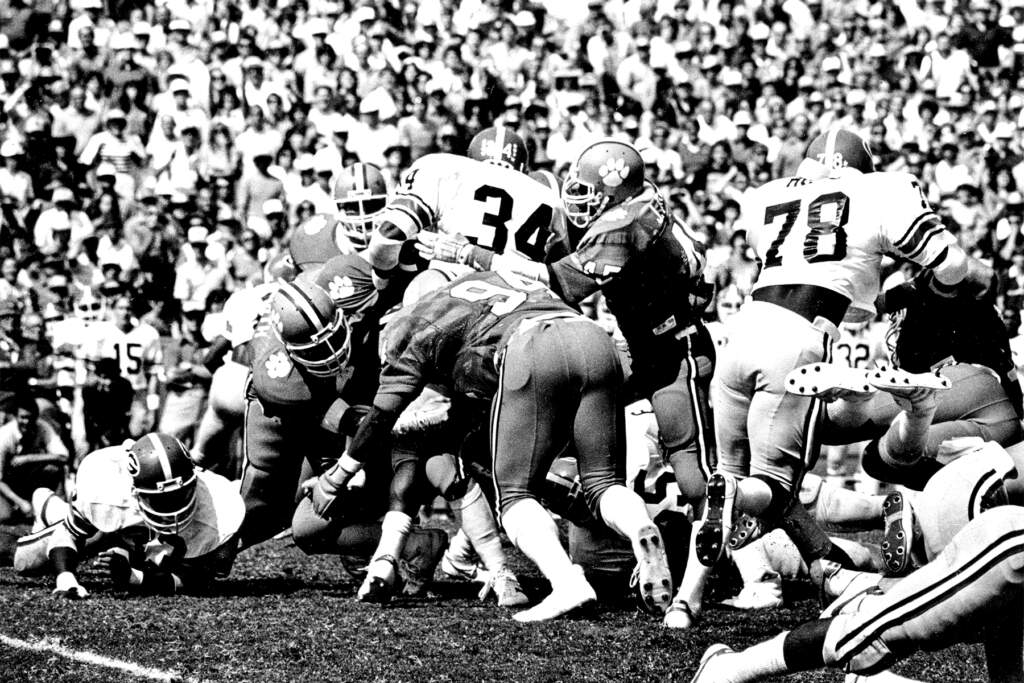