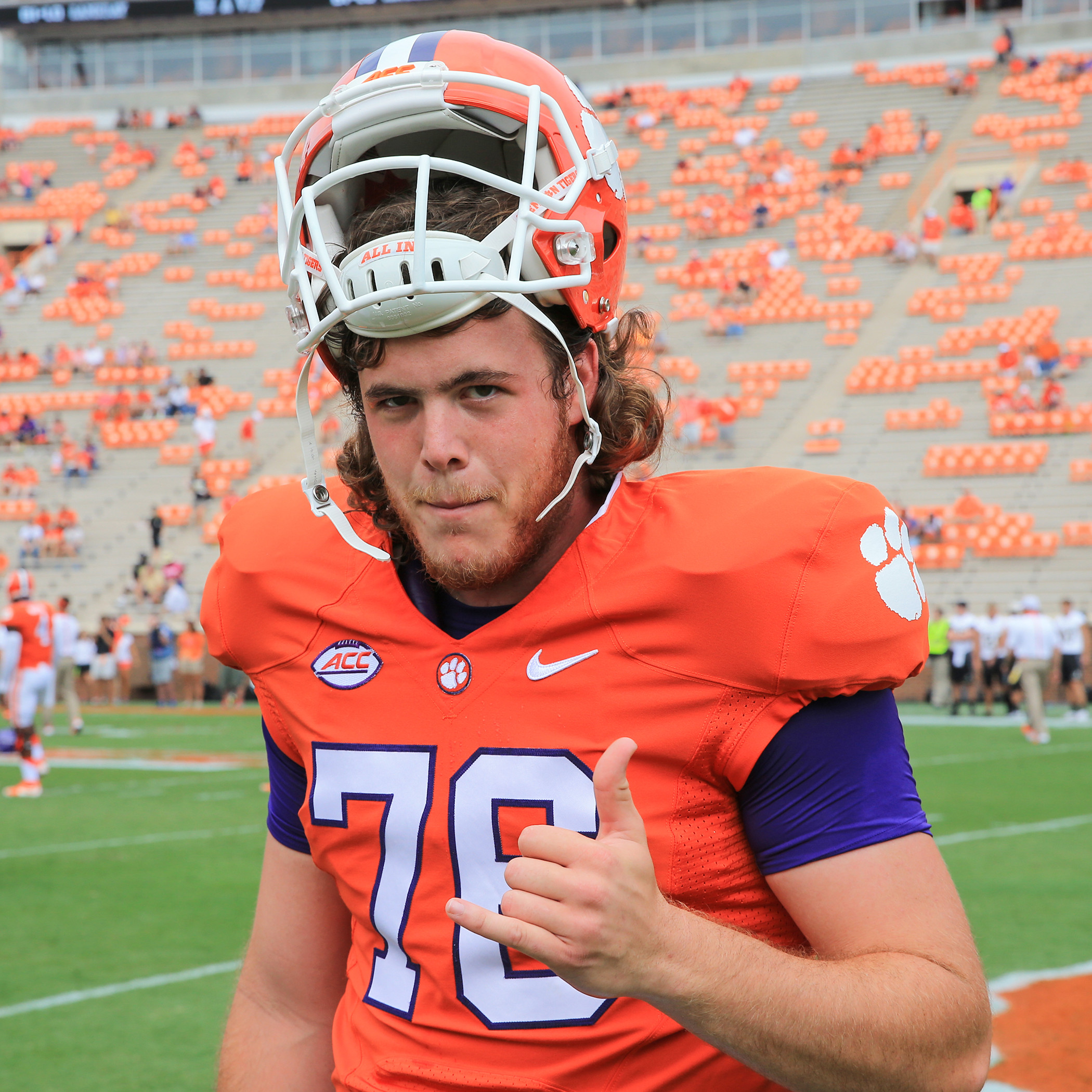 For Jordan Bianchi, asking him to think of one particular moment that sticks out from the rest during his time with the Clemson football program is hard, but not because they aren’t plentiful. Rather, just having the opportunity to be a part of these moments is all the Greer, S.C., native could ask for.

“Being a part of the team and around the guys and coach (Dabo) Swinney, who’s taught me so many great life lessons, has been a great experience,” said Bianchi.

Clemson was always a part of the plan for Bianchi, who originally came for civil engineering after transferring from Presbyterian College. After getting involved with the Tiger football program, he decided to walk on to the team, and he has not looked back.

“I decided to walk on to the team because I like being a part of something greater than myself and with a group of guys who want to win and be the best.”

Originally a baseball player out of high school, he had his ups and downs prior to Clemson and credits his parents for always supporting him throughout the process. Bianchi also credits both Swinney and co-offensive coordinator Jeff Scott for being his biggest influences in the football program and pushing him to be the best he can be.

After he graduates, Bianchi plans to pursue his master’s degree in structural engineering.

From the classroom to the gridiron, being a member of the team has given Beau Brown a second family and prepped him for his future.

Brown has many memorable experiences, having been through big bowl game wins against Louisiana State, Ohio State and Oklahoma. For Brown, it is moments like these that are unforgettable.

“There’s nothing like the bonding between teammates during a postgame celebration,” stated Brown. “I’ll eventually forget about the scores of games, but I will never forget the memories I’ve made with my teammates on and off the field.”

During his time in the program, Brown, a Beaufort, S.C., native, has been impacted the most by director of football strength & conditioning Joey Batson and defensive backs coach Mike Reed.

Off the field, Brown credits his parents for molding him into the person he is today and being his biggest supporters.

“Coach Batson has taught me that it takes drive, determination and hard work to finish goals and tasks in life,” added Brown. “Coach Reed has not only given me more knowledge of the game of football, but also taught me how to enjoy the little things in life as well as believing in myself.”

Upon graduation, Brown plans to take some time off and travel to explore different cultures around the world before pursuing a career in the oil and gas industry.

A recruited walk-on from Walterboro, S.C., Jim Brown patiently worked behind fellow long snappers Phillip Fajgenbaum and Michael Sobeski for four years. Looking back at his time with the team, Brown has lived a dream and has been ecstatic at the opportunities that have been put before him.

Brown not only became the starter this year, he was also awarded a scholarship, an announcement made in front of the team in August. Brown’s experience as a walk-on his first four years have served him well, and he knows that he cannot afford to settle for anything less than he has given up to this point.

“Getting to come on with the scholarship guys was awesome and helped me understand everything and see what was going on. I was the third-string guy for three years, and I got to see a lot thanks to the two long snappers I was behind. Once they left and the door opened for me, I went right through it trying to seize every opportunity I’ve had.

“I don’t ever want to get complacent and think just because I have a scholarship, I’m any better than any other guys, because I know how it was and know how to get here.”

Brown credits former Tiger placekicker Chandler Catanzaro as well as Sobeski and Fajgenbaum as his role models, but also heaped plenty of praise on special teams analyst Brandon “Stopwatch” McCombs for being the “crew leader” of the unit.

“He (McCombs) always has our backs, is looking out for us and is our go-to guy,” said Brown. “He’s helped us through the last four or five years being our liaison and our crew leader. Everyone looks to him for advice, and any need we might have we go to him. He has been here throughout the entire process and he doesn’t get thanked enough.”

Brown is still exploring several options once the season ends, but remains interested in working in international business and pursuing his master’s degree.

Offensive tackle William Cockerill could not have imagined what being a part of the Clemson football program would be like. Now he knows and enjoys every second of it.

“It’s a job,” said Cockerill. “It’s not just football…it’s everything.”

As a part of the program, the Sumter, S.C., native credits offensive line coach Robbie Caldwell and director of football strength & conditioning Joey Batson for making him a stronger player and better lineman. He also notes the impact Jeff Davis has made on him through his football journey.

“Jeff Davis has helped me out a lot,” stated Cockerill. “My mom and dad have been huge for me as well. I call them after practice for words of encouragement for anything, whether it’s class or football.”

After graduation, Cockerill wants to teach and coach football at the high school level, and also continues to actively explore other means of career options.

Hailing from Italy, Brennan Goodnature certainly had his own adjustment period to go through. But his time with the team has been one he has certainly enjoyed.

“My time with the team has been great,” he said. “There is a real sense of family that I felt right away. All the guys have been really cool and helpful with showing me the ropes around here.”

Italy remains a dear place to Goodnature, who loves the country for its own sense of family and familiarity.

“Italy and the U.S., are really different. Italy is super chill and laid back. Everyone is on their own time. The Italians are super friendly as well. Living in Italy was a great experience, but America will always be my home. I have a special place in my heart for Italy.”

Goodnature’s biggest role models have been his brother, stepfather and father, who have all been big influences on him. All three are in the military and have taught him valuable lessons.

He has enjoyed his brief time at Clemson and credits Mike Dooley for helping him adjust and supporting him through the walk-on process. After school, he plans to attend medical school and enlist in the Army as a doctor.

Growing up a Tiger fan, Quintin Hall always dreamed of being a Clemson football player. That dream has been an opportunity that Hall has loved from the beginning, whether it was his first time running down the Hill or the 2014 Orange Bowl victory over Ohio State.

“Being part of the team has been incredible,” said Hall. “I’ve built some deep friendships and have had experiences I would have never gotten otherwise. This opportunity has been better than I ever imagined.”

Since his time at Clemson as part of the football program, Hall has been impacted the most by assistant football strength & conditioning coach Adam Smotherman, known as the “get-back guy” for defensive coordinator Brent Venables.

A two-time ACC Academic Honor Roll member, Hall plans to pursue a master’s degree in kinesiology to become a strength & conditioning coach after he graduates. Hall hopes to emulate what he has learned to impact players in the same manner that Smotherman has while carving out a role in player development and mentoring athletes.

“Coach Smotherman is a strong Christian man who lets God shine through him as he coaches all of us,” added Hall. “He always keeps a good attitude and inspires me to work hard by pushing me when I need it and encouraging me. As an aspiring coach, I hope to take what I’ve learned from him and use it to impact players in the same way.”

A three-time ACC Academic Honor Roll member, defensive end Collins Mauldin has enjoyed his run as a member of the Clemson football program. The Rock Hill, S.C., native has been witness to many great moments, but the bowl victories are what stick with him the most.

“I’d definitely say the bowl games are some of my favorites,” said Mauldin. “The Russell Athletic Bowl was certainly among the best, especially being with the guys and having a great win against Oklahoma.”

Mauldin has found his niche as a reserve defensive end and tight end the past five seasons, and he credits defensive ends coach Marion Hobby for being a great support system and someone he can trust.

Off the field, Mauldin credits James Trapp, now with the Buffalo Bills, for being a positive influence on him. Thanks to these two men, Mauldin overcame the challenges of balancing academics and athletics en route to multiple ACC Academic Honor Roll selections.

“Coach Hobby has been a huge impact,” added Mauldin. “I see him every day, at least four hours a day, so he’s like a second dad to me. He’s someone I can come to on a daily basis if I need someone to talk to.”

Having graduated in May with a degree in wildlife & fisheries biology, Mauldin is exploring graduate school options once he finishes his final season of football.

Clemson is well known for its engineering programs, and offensive tackle Daniel Stone has reaped both the athletic and academic benefits Clemson has had to offer.

Hailing from Simpsonville, S.C., Stone’s favorite Clemson football moment was the 2013 game against Georgia in Death Valley, and it is a moment that sticks with him.

“It was so loud and you could feel the energy in the air. The whole stadium was shaking.”

Upon graduation, Stone will begin an engineering co-op starting in January.

A native of Ninety Six, S.C., Harrison Tucker is passionate about establishing a career in computer engineering. But the urge to play football again after graduating from Ninety Six High School never left him, and he chose to walk on for the Tigers.

At Clemson, Tucker has had the best of both worlds…playing the game he loves and building towards his future career.

“It’s been a great and fun experience,” said Tucker. “I love football and wanted to try it after doing it all through high school. It’s been a privilege to be out here with the team.”

Tucker’s favorite Clemson memory was the 2013 Georgia game, with the intense atmosphere and the Tigers puling out a victory over an SEC rival.

Looking back on his time at Clemson, Tucker credits offensive line coach Robbie Caldwell for pushing to be the best man he can be.

“He’s a great man, he’s funny, he wants you to do well and he keeps on you hard,” said Tucker. “He’s made me better technique-wise and being responsible as a man.

“Something I learned to do is that I’ve kept to myself, focused on my schoolwork and taken pride in what I do with my major.”

After his final season, Tucker plans to continue to focus on his career goals in computer engineering. He recently completed a year-and-a-half-long internship in Anderson, S.C., and plans on using that experience in the future.