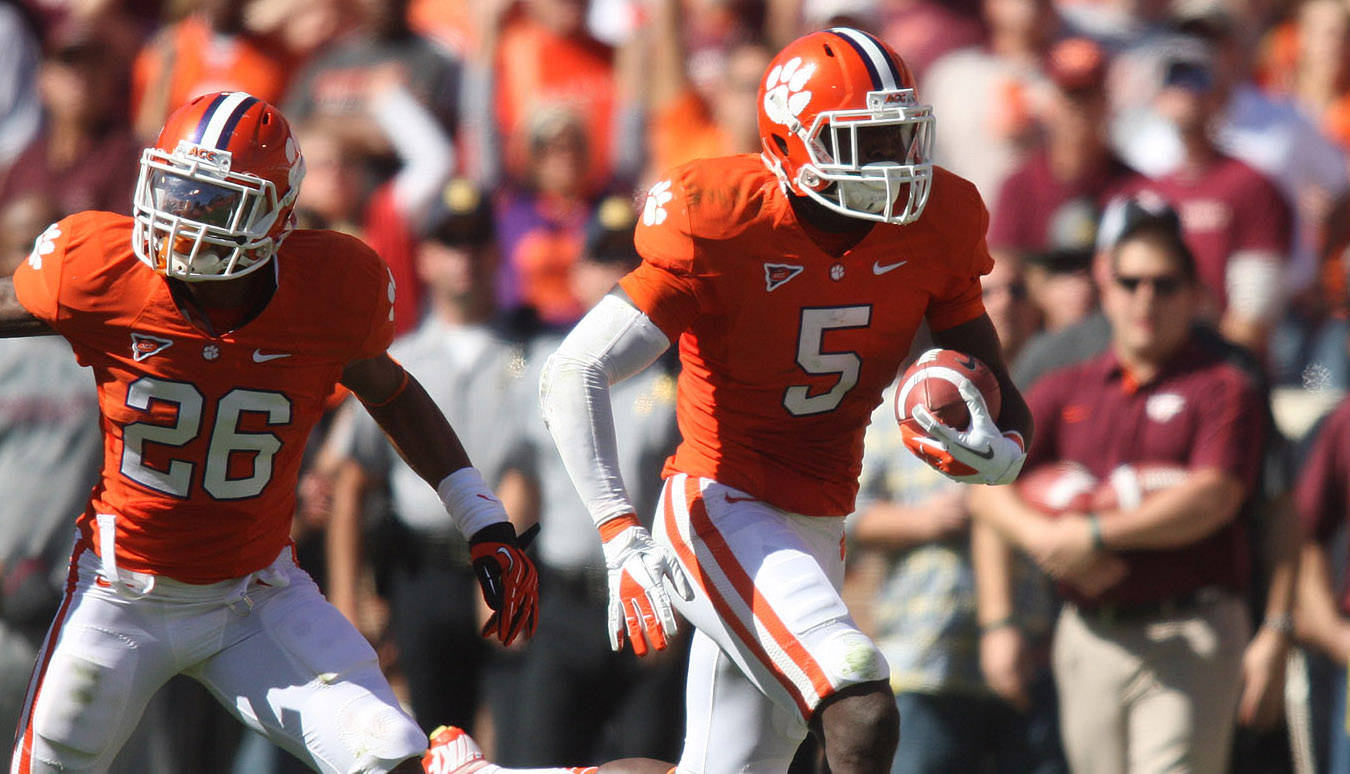 Meeks Named ACC Defensive Back of the Week

Three NC State players are recognized for their performances in the 20-18 win at Maryland. Bryan Underwood, the Receiver of the Week, caught six passes for 134 yards. T.Y. McGill is the Defensive Lineman of the Week after recording eight tackles, and Niklas Sade connected on the game-winning field goal with 32 seconds left to earn Specialist of the Week honors.

Florida State’s Telvin Smith, the Linebacker of the Week, tallied a season-high eight tackles and two tackles for loss in the Seminoles’ 33-20 win at Miami.

Clemson’s Jonathan Meeks intercepted two passes and returned one 74 yards for a touchdown in the 38-17 win over Virginia Tech to garner Defensive Back of the Week accolades.

DEFENSIVE BACK – Jonathan Meeks, Clemson, Senior, S, 6-1, 210, Rock Hill, S.C.Meeks had two interceptions, including one he returned 74 yards for a score in Clemson’s 38-17 win over Virginia Tech. He also had four tackles and a pass broken up for three total passes defended. The 74-yard return for a score was the longest interception return for a score by a Clemson player since 2006. Ahead 10-7 in the second period, with the Hokies driving, Meeks intercepted the pass at the Clemson 26 yard line and returned it 74 yards for the score to give Clemson a 17-7 lead. With the interception, Meeks jumped to fifth in Clemson history in total interception return yards with 192.

OFFENSIVE BACK – Sean Renfree, Duke, R-Senior, QB, 6-5, 225, Scottsdale, Ariz. Renfree led Duke to a 33-30 win over North Carolina by completing 23 of 36 (.639) passes for 276 yards with one touchdown and one interception. The senior engineered a game-winning, 14-play, 87-yard drive that resulted in a 5-yard touchdown pass to Jamison Crowder on 4th-and-2 with 13 seconds left in the game. On the drive, he completed 8-of-11 (.727) passes for 78 yards including the TD and converted three 3rd-down chances through the air as well as the 4th-down conversion for the touchdown. Renfree directed the Duke offense to 510 yards of total offense – the highest total of the David Cutcliffe era versus ACC competition – against a Tar Heel defense that entered the week ranked third in the ACC and 22nd nationally in total defense, allowing just 327.0 yards per game.

OFFENSIVE LINEMAN – Perry Simmons, Duke, R-Junior, OT, 6-5, 300, Raleigh, N.C.Simmons spearheaded Duke’s 33-30 win over North Carolina by playing all 91 offensive snaps and helping the Blue Devil offense compile 510 yards of total offense against a Tar Heel defense that entered the week ranking third in the ACC. Simmons was a key component of Duke’s offensive front that opened holes for a ground attack that amassed 234 yards – the highest output under David Cutcliffe at Duke. Simmons and the offensive line protected quarterback Sean Renfree, who completed 23 of 36 passes for 276 yards, and only allowed one quarterback sack to a North Carolina squad that entered the game tied for third in the conference in sacks per game (2.43).

RECEIVER – Bryan Underwood, NC State, R-Sophomore, WR, 5-11, 174, University Heights, OhioUnderwood hauled in six receptions for 134 yards in the Wolfpack’s 20-18 victory over Maryland in College Park. He played 57 snaps from scrimmage. The redshirt sophomore scored on a 68-yard strike from quarterback Mike Glennon in the third quarter, and had a 17-yard catch on the Pack’s final offensive drive en route to the winning field goal. Underwood has scored a receiving touchdown in seven straight games – a Wolfpack record and just two games shy of the ACC record.

DEFENSIVE LINEMAN – T.Y. McGill, NC State, Sophomore, DT, 6-1, 298, Jesup, Ga.McGill anchored the defensive front that tallied six sacks in the 20-18 win at Maryland. While in for just 32 snaps from scrimmage, he made eight total tackles (six solo) and had two sacks for a total of 16 yards.

LINEBACKER – Telvin Smith, Florida State, Junior, LB, 6-3, 215, Valdosta, Ga.Smith registered a season-high eight tackles, including seven stops, and led Florida State with two tackles for loss in the Seminoles’ 33-20 win at Miami. He also forced a fumble that set up Florida State’s first points on the night after falling behind 10-0, and came up with two pass break-ups. The Seminole defense held Miami to a season-low 258 total yards and only 29 on the ground. Miami had minus-12 yards rushing in the second half against Florida State, whose defense leads the ACC and ranks in the top seven nationally in all five major statistical categories.

SPECIALIST – Niklas Sade, NC State, Sophomore, PK, 6-3, 200, Wake Forest, N.C.Sade kicked the game-winning field goal with 32 seconds left on the clock at Maryland to give the Wolfpack a 20-18 lead. The sophomore also booted a 21-yarder earlier in the contest. Sade started out the season 2 for 5 on field goals and has since gone 5 for 5. He hit both extra points and kicked off five times against the Terrapins, averaging 60.6 yards and had one touchback.

ROOKIE – Jela Duncan, Duke, Freshman, RB, 5-10, 200, Charlotte, N.C.Duncan helped Duke to a 33-30 win over North Carolina by totaling 118 all-purpose yards and scoring one touchdown. The rookie running back rushed 22 times for 74 yards, caught three passes for 12 yards, and returned two kickoffs for 32 yards. His 2-yard touchdown was his third rushing score in the last four games. On Duke’s game-winning, 14-play, 87-yard drive, Duncan converted a 3rd-and-6 from the North Carolina 19 yard line with a 6-yard reception. Duncan was a key component of Duke’s ground attack that amassed 234 yards against a Tar Heel defense that entered the game ranked third in the ACC and 14th nationally against the run, surrendering just 99.7 yards per contest.