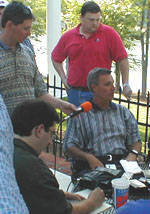 Clemson, S.C. – Members of the media got a chance to visit Tommy Bowden in his new house after the Clemson coach’s annual media golf tournament on Tuesday.

The media golf tournament began at 1 o’clock at Clemson’s Walker Course. Members of the media were paired with Clemson football coaches and administrators in a captain’s choice tournament format. After his team finished last in the 1999 tournament, Bowden’s team won the event in 2000 with a 15-under-par score of 57.

Following the tournament, members of the media congregated at Bowden’s house in the Stillwater neighborhood located just outside of Clemson. Media members were treated to a buffet dinner and then met with Bowden by his pool to ask questions about the upcoming season.

Below are some the items that were discussed by the media and Bowden.

Expectations for the season: My expectations are high. I would say on paper if you look at it, (high expectations) are justified. But the thing here is, Clemson has not finished in the top-25 in seven years. To me, that would be the next logical step. Had we beat Mississippi State and had seven wins, we would have probably finished in the top-25. To finish in the top-25 would probably take seven wins. Would I be satisfied with seven wins? No. Seems to me that step has to be taken before you can jump to the BCS. What needs to happen to get to the next level? You have to increase the quality of your personnel and the depth. That is going to calculate into wins, when you have a bunch of good players. I didn’t look at any film when I got here of Tommy West’s last year. It didn’t make any difference, I’ve got those players regardless. But if you look at last year, these guys played hard. For the first year that we were here they were in 11 games. Every game went to the wire. Now what we have to do is get a bunch of good guys to play hard for 60 minutes. Then we can win a bunch of games instead of six or seven. The whole key to getting good players is having good facilities to attract them. You have to have good coaches to coach them. The administration has been real good here with letting me raise salaries of coaches who had opportunities to leave. Now we have to step to the plate in other areas and then I think I need to be held accountable 100 percent. Will Woodrow Dantzler improve this season? I think Keith will have a similar season, simply because he has the same defensive coordinator and the same defensive scheme.

Woody I hope will be better because he started four games last season and he will go in as a starter. Last year he was a second team player and only started four games. Now he goes into two-a-days as the number one guy. He made one statement in the paper that from a coaching standpoint you are glad to see him make. When he gets to the point where he can react instead of thinking, in this offense that is the key. When you have five guys (receivers) out and they are bringing six and you have five protecting, you are running. When you can react and make a quick decision instead of thinking about it, you will hit it and get it in this offense. You can go.

Starting QB position As long as I am coach here, every position we have will be up for grabs up until gametime. Tenure, I wish I had tenure. I don’t have it as a coach….the players don’t have it. Schedule effecting possible BCS chances: Virginia Tech last year played James Madison, I believe they are I-AA and they played Temple, Rutgers, Pitt and UAB and got in the championship game. I’ll take that schedule before the one I have. The one I have this year is more difficult than that. Would you like to have one QB or two? Ideally, you would like to have one guy that creates some separation, but again Florida State probably lost a National Championship because there was a lot of separation from number one and number two. I think with the guys we have here on campus, there is not going to be a lot of separation. That’s good. I would like for there to always be some doubt going into a game so people can say this guy might be as good as that guy. Will Clemson have a thousand-yard rusher in 2000? We better. If we don’t this year then we are recruiting the wrong guys. We have the wrong guys in the program. If we don’t have a thousand yard rusher, we ought to be shot. They ought to be shot. Somebody ought to be shot. We ought to have a thousand yard rusher. (Zachery) was a thousand yard rusher last year if he wasn’t suspended for Marshall and if he played in the bowl game. He had 820 last year, that was about 90 a game short. You ought to have a thousand yard rusher, it is a shame not to. If we don’t have 2,000 yards rushing and have one guy have at least 1,000, then we won’t win that many games. Akil Smith situation: We will take it right up until the last day, August 9th. We will let the doctors and his family make a decision and tell me what it is. We will roll with the punches. If he says he wants to red-shirt, we have a lot of flexibility. With what we do offensively, you can take a smaller guy with the way we move the pocket. We don’t mash people off the line. We hunt and peck and ankle bite and stuff like that. If Akil comes back, fine, if he doesn’t we will take a third guard. We have a little bit of depth at guard. Home uniforms not being changed: Enough schools have declined (to wear dark jerseys at Clemson) to say to heck with it, let’s go back to the way it was before. I just figured everybody would do what Georgia Tech did. If Georgia Tech wanted to wear white at home, let them wear white at home. We started to get (schools) turn us down so I thought this would be too hard on my equipment guy to switch it up. Fan reaction to possible uniform change: I received four phone calls out of 85,000 people. I like those odds. I answered every call I received. If they called my secretary and it was about the jerseys, I took the call. I think I took four and the last time I looked up in the stands there were more people than that. So, I don’t think it was that big of an issue. It may have been on the chats on the computer, but I don’t look at those. If somebody is real serious they will call me and I will always take the call.