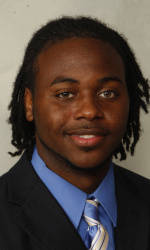 McNeal Has Torn ACL, Out for 2012 Season

CLEMSON, SC – Clemson reserve quarterback Tony McNeal suffered a torn ACL on the last offensive play of the Orange & White Spring Football game at Memorial Stadium on Saturday. McNeal will miss the 2012 season as he recovers from the injury. He will have surgery on the knee in the near future.

McNeal red-shirted the 2011 season at Clemson. The native of Chester, SC was competing to be a reserve behind first-team All-ACC signal caller Tajh Boyd. He completed 4-9 passes for 49 yards in the spring game before the injury.

Two other Clemson players had surgery on Monday. Freshman Jay Guillermo, an offensive lineman from Maryville, TN, had surgery on a shoulder, while red-shirt freshman quarterback Morgan Roberts had surgery on an ankle. Neither surgery was the result of a serious injury and both should be ready to resume workouts this spring and summer.

Roberts had a strong performance in the spring game as he completed 14-23 passes for 149 yards and a touchdown and he added six rushes for 35 yards.