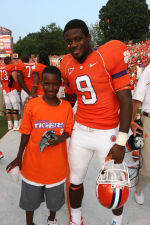 Clemson, SC – Clemson defensive back Ray Ray McElrathbey is scheduled to appear in a segment of the Oprah Winfrey Show on Friday, Oct. 20. Special correspondent Lisa Ling “goes inside America’s hidden population of children running their entire households.” The segment was taped via satellite on Wednesday. The program is broadcast locally on WYFF Channel 4 in Greenville, SC.

McElrathbey drew the attention of national news outlets after being granted temporary custody this summer of his 11-year-old brother Fahmarr, who lives with him in an off-campus apartment.