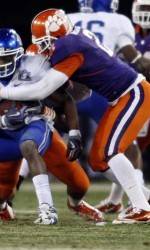 CLEMSON, SC – DeAndre McDaniel heads a list of 13 Clemson players named to one of the four preseason All-ACC teams selected by Phil Steele in his preseason college football magazine for 2010.

McDaniel was named a first-team preseason All-American by Steele, one of six ACC players on the first team. The safety was a first-team All-American by the Football Writers Association in 2009 as a junior when he was the only Division I player with at least eight interceptions and 100 tackles.

McDaniel and Jarvis Jenkins were both named preseason first-team All-ACC by Steele. Jenkins, a defensive tackle and a native of Clemson, had 69 tackles last year, including 11 tackles for loss.

Chris Hairston, Da’Quan Bowers and Rashard Hall were all named second-team All-ACC by Steele. Hairston started 12 games at left tackle for the Tigers last year and was a big reason C.J. Spiller averaged 5.6 yards per rush. He was a second-team All-ACC selection in 2009. Bowers, a defensive end, has been limited by injuries his first two years, but had 58 tackles and 11 tackles for loss last year helping Clemson to a top 20 ranking in total defense and scoring defense. Hall had six interceptions at a safety position last year when he tied for 19th in the nation.