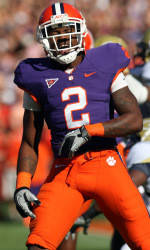 CLEMSON, SC – DeAndre McDaniel and Miguel Chavis, both senior leaders on Clemson’s 2010 defense that ranked among the top 20 in the nation, signed free agent contracts on Tuesday. That was the first day that non-drafted free agents could sign with an NFL team after the league’s lockout ended on Monday.

McDaniel signed with the New Orleans Saints and hopes to become a teammate with former Clemson linebacker Anthony Waters, who was a member of the 2009 Super Bowl Champion Saints. McDaniel was a two-time All-American at Clemson, including 2009 when he was a first-team All-American according to the Football Writers Association. He was a two-time first-team All-ACC safety.

Chavis signed with the Pittsburgh Steelers on Tuesday and hopes to become a teammate of former Clemson All-ACC tackle Nick Eason, who was a member of the 2008 Super Bowl Champion Steelers.

In 2009 Chavis had 28 tackles in 14 games when he helped the Tigers to a top 25 season and Atlantic Division title. As a senior in 2010, Chavis had 27 in 10 games and had six quarterback pressures. He finished his career with 71 tackles in 47 games.